A Nigerian man has been appointed by the Queen of England, Elizabeth as the UK House of Common Serjeant at Arms. 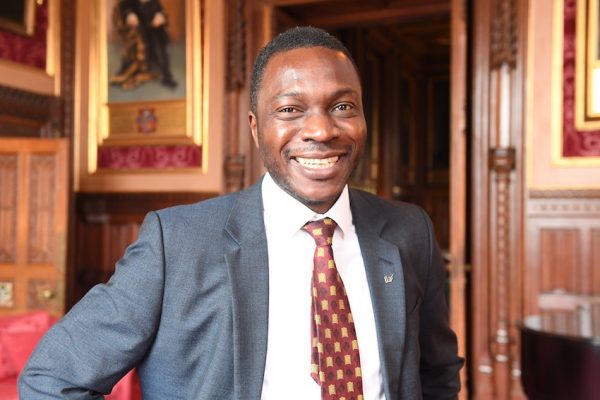 The appointment was announced by the Speaker of the House of Commons, John Bercow on Tuesday.

According to the announcement shared on the website of the House of Commons, Oyet is a chartered engineer and he was appointed following the retirement of Mohammed Kamal El-Hajji in July.

With this appointment, Oyet has become the new ceremonial head of security and the only person legally allowed to carry a sword in the House of Commons.

It was reported that Ugbana was already well known to many members of the House through his role as Parliament’s Principal Electrical Engineer and Programme Director for the Estate-wide Engineering Infrastructure and Resilience (EWEIR) Programme – which aims to make the parliamentary estate carbon neutral by 2050.

With his new appointment, Oyet would become even more visible as the carrier of the House of Commons mace during the Speaker’s procession, and into the House of Lords during the State Opening of Parliament.

Reacting to his appointment, Oyet said, “It is a great honour to serve in such a historic role, which combines the needs and challenges of the modern era, while also maintaining the dignity and essential traditions that have helped Parliament endure.

“I’m a real people-person and love working closely with MPs, staff and members of the public, so I will do my best to enhance morale and improve the excellent service already provided by the Serjeant’s office.”

For his part, Speaker Bercow said, “I have known Ugbana for several years and have always been impressed by his ability, his attitude and his approach to other people. My longstanding impression of him was confirmed when he won a diversity and inclusion award for being an ‘an inspiring role model’.”

Born in Nigeria, Ugbana moved to the UK with his family in 1991. He is married to Claire, his childhood sweetheart. The couple has four children – three sons and a daughter aged between 14 and 23.