Businessman, Tunde Ponnle, the founder of MicCom has married a former ex-governor of Osun state. 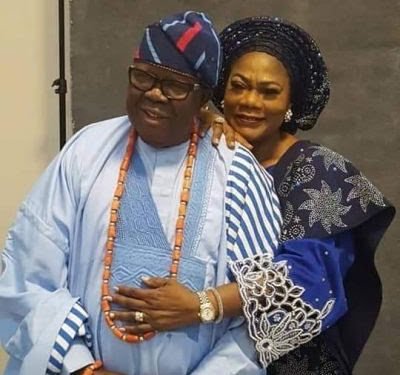 Their love was well-kept. Soft sell magazines and blogs would have given everything to have it. But, only the two of them saw its infancy and kept it until they were ready to say: ‘Yes, I do’. Now, everyone knows of their second chance at being struck by the cupid’s arrow. And posers are being raised. How? When?

Welcome to the world of Tunde and Titi Ponnle. They are grandparents. Prince Ponnle is 78. He will be 79 in December. The new Mrs Ponnle is 70. She is a December daughter like her husband. She will be 71.

The marriage was low key in Osogbo, the Osun State capital. The duo got the approval of their children before stepping into the union, according to a family source. It took place over a month ago, but the pictures only became public at the weekend.

The wedding was solemnised in a church. The traditional ceremony was observed. Tubers of yams, salt and others were given out to the bride’s family. There was a best man and a chief bride’s maid.

It was followed by a big party, which was exclusive – away from the prying eyes of the nosey reporters. Only few close friends, family members and relatives attended.

They are no strangers to people in Osun State, where they hail from. They are well-known in Nigeria, their country. The husband is a pioneer industrialist, who gifted Nigeria the MicCom Cables and Wires. He also revolutionised the game of golf with the establishment of MicCom Golf Hotel and Resort Centre in Ada. The people of Ada will never forget the Ponnles in a hurry. The town was sleepy before they established what has become one of the best-known leisure and hospitality centres in Nigeria. MicCom Golf Hotel & Resort is the first privately-owned golf course facility in Nigeria.

Until October 29, 2012, Prince Ponnle— who once donated a kidney to one of his sons, Kola— was married to Comfort Olufunke. Death ended this beautiful union, which gave Nigeria a lot in the form of the MicCom holdings. She died of cancer at the Ilandough Hospital, Cardiff, United Kingdom. Her death led her widower to start a foundation, which seeks to curtail the spread of some forms of cancer. Bishop Ayo Ladigbolu described the lives of the couple as a “study in diligence, honesty, integrity and dedication to the Christian faith”.

The Ponnles spent decades empowering people and showing them the way to make their ways better. One of their phenomenal contributions to nation-building is a viable annual scholarship scheme – MicCom Foundation for Educational Development (MIFED).

The late Mrs Ponnle attended the Anglican Girls Secondary Modern School, Ile-Ife from 1959 to 1961. It was in this school she met Tunde Ponnle, who later became her soulmate. He was a teacher at the school. They got married on Tuesday, April 26, 1966, in Ibadan.

“I saw her at the school, I taught her as a student-teacher; and, of course, she was a very brilliant student; and the most brilliant in her class. I proposed to her after her final year, when she was to proceed to UMC at Ile-Ife,” said Ponnle.

The late Mrs Ponnle added: “I didn’t want to marry him because he was my teacher. Again, because I wasn’t looking for a husband that I was going to answer sir, sir. When I agreed to marry him, I told him that I wasn’t going to address him as sir again and he agreed. And, before he left that day, I called him his name, Tunde, several times and he was very happy.”

After modern school, the late Mrs. Ponnle proceeded to the United Missionary College, Ibadan for teacher’s training course from 1962 to 64. She obtained her Grade Two teachers certificate before moving to the University of Ife in 1969 for her associate diploma in Education, which she completed in 1970.

Since her death, her husband has kept hope alive through the MicCom Cancer Foundation. The Ibokun Road, Ada, Osun State-based foundation is out to help women fight breast cancer and also help men who may have prostate cancer.

The bride is a politician. Until last November, she was Osun State deputy governor. She grew up in Osogbo but was born in Oyo town. Her father was a primary school headmaster. She attended St. Catherine’s Anglican Girls Grammar School, Owo, Ondo State and was offered admission to read Law at the University of Ife, now Obafemi Awolowo University. Her father did not like her choice of Law because he believed lawyers were liars. He wanted her to be a school principal. In deference to her father, she sought admission at the universities of Lagos, Ife and Ibadan and the University of Lagos offered her a place to read History and her father was happy.

“After graduation, I expected them to send me back to teach; they moved me to the Ministry of Education. I, therefore, transferred my service to the University of Lagos later as an assistant registrar. Later, I was made the university’s Admission Officer. I was a faculty officer and that gave me an ample opportunity to interact with students. By nature, I love interacting with young people, more so as a teacher. I was even made hall mistress for Moremi and for that when students had problems, I was like their parents. If they had to go out for a long time, they would have to inform the hall warden and the mistress which would be documented. And also being adults, we could not discipline them; rather, we guided them, though that was not my core area of competence. It was a service to the university,” she told The Nation in a 2010 interview.

While at the University of Lagos, she married Prof. Siyanbola Tomori.

“We met at the university but he was not my lecturer. Meeting Prof. Tomori was not by accident. He is a first cousin to Prof. Jegede who is retired. Mind you, I said I worked in the library, Mrs Jegede, wife of Prof. Jegede, worked in the library and as an Ara-Oke (village girl), while in the university; they used to ask, ‘What is this girl always reading?’ Being the first child of my family and there was a long gap between myself and my brothers, for a long time, my family looked up to me that I must succeed educationally; so you could say that I was a bit anti-social after my HSC and when I joined the university. Instead, of enjoying myself, which I missed a lot at that time, I was always reading. And Mrs Jegede was working in the library. She called me and asked where I came from, which I told her and she acknowledged that fact that I loved reading.

“After leaving the library, she would ask me to come to her house and by the time I got to know the Jegedes, I became very close to them. I used to read in their house at the weekend instead of jumping around. When Prof. Tomori came back from Canada, he lived with them before the university gave him accommodation; that was how we met. He would ask, ‘Sorry, what is your problem? Why are you always carrying your books around?’ I would ask whether it was a crime (laughs). He was a professor of Economy in the Social Sciences, while I was in the Faulty of Arts,” she told The Nation.

The marriage before it collapsed was blessed with four children. Two of her children are medical doctors, the first and the last. Another one was a banker but later joined the Dangote Group.

For the couple, they now have a second chance to hold and to cherish after years of biting loneliness.