The story has been told of a man who woke up without a testicle after he went to the hospital for his routine operation. 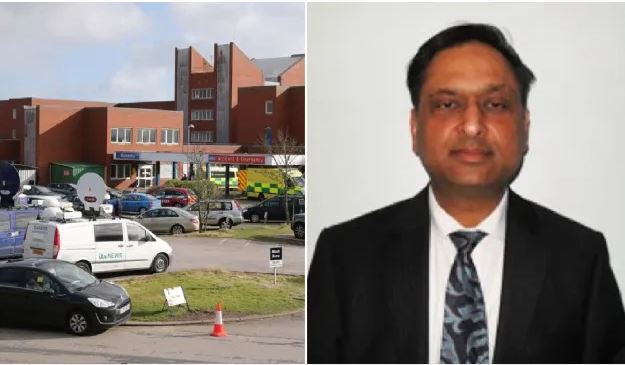 Consultant urologist Ashutosh Jain is being investigated over the botched operation (Picture: SWNS)

A dad who lost a testicle after a simple operation went wrong has launched legal proceedings against the hospital.

The 62-year-old underwent a 30-minute procedure at Furness General Hospital in Barrow, Cumbria, in April to remove the fluid and swelling from his scrotum.

He claims consultant urologist Ashutosh Jain left a drain in his testicle for 24 hours, leaving him in ‘excruciating pain’ and causing it to become infected.

He was rushed back into hospital for surgery two days later – and woke up to find his right testicle was missing.

He claims he hadn’t been told exactly what he was going back into theatre for and had to spend the next 12 days in hospital recovering from the operation.

Reports obtained by the patient reveal a surgeon found the testicle was ‘black and unlikely to recover’ and was told to ‘excise the dead testicle’ when he consulted a colleague.

The patient has now instructed medical negligence expert lawyer Michelle Armstrong to help with his case.

The man, who has not been identified, said: ‘That first op was botched and I am in no doubt that Mr Jain did something that ended up cutting off the blood supply to my testicle.’

The 62-year-old was originally diagnosed with a hydrocele, a common and non-harmful type of swelling in one of his testicles.

He says the operation has left him with a painful lump where his testicle was and is taking morphine as a consequence of the surgery.

Losing a testicle has also had a huge impact on his self-confidence.

He says he won’t allow his wife to see him undressed and he suffers night sweats which may be caused by low testosterone levels.

The University Hospitals of Morecambe Bay NHS Foundation Trust (UHMBT) have launched their own investigation, which is due to be completed by the end of October.

UHMBT director Shahedal Bari said: ‘We have confirmed that due to the thoroughness of the investigation that is taking place, it is still ongoing.

‘We will keep the patient informed as to the progress of the investigation, and once completed we will share the report with him.’