A man has had to get his scrotum cut off after he was found out to have contacted a disease that made it swell. 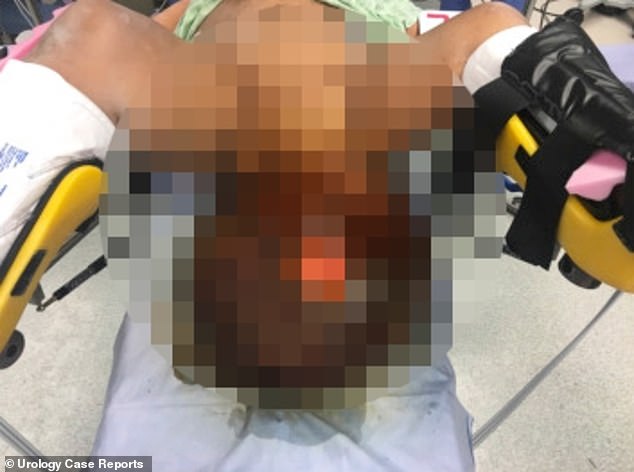 A 43-year-old man was forced to have his scrotum chopped off after is became so swollen it hung below his knees and began rotting, doctors have revealed

A 43-year-old man was forced to have his scrotum chopped off after it became so swollen it hung below his knees and started to rot.

The unidentified man's scrotum gradually grew over three decades, leaving him unable to walk, relying on his mother to help him carry out day-to-day tasks.

A CT scan of his abdomen and pelvis at a hospital in Panama revealed he had a massive hernia containing part of his bowel.

A build-up of fluid had caused his scrotum and leg to swell to 3.35kg (7lbs) in weight, causing open wounds that oozed foul-smelling pus. His penis also became 'buried' in the swollen flesh.

The only course of action was emergency surgery to remove all the infected tissue in a series of complicated procedures.

The report said the man hadn't seen a doctor for years before arriving at an A&E department in Panama with a fever, fast heart rate and clear ballooning of his scrotum.

Shocking images show the extent of the damage to the man's scrotum, which had started to become gangrenous.

Although his testicles were removed, his penis remained in tact, and it is understood he is now recovering.

When he arrived at hospital, it was revealed he relied on his mother for basic daily needs. His medical history was limited.

On examination, the skin was thickened, a deep red, with two open and infected wounds.

Scans showed an inguinal hernia, which is when tissue, such as part of the intestine, protrudes through a weak spot in the abdominal muscles.

It can lead to life-threatening complications if it's not treated, and the doctors said it had caused lymphedema.

Lymphoedema develops when the flow of the lymphatic system gets damaged and fluid cannot move properly.

There are various causes including cancer surgery, radiotherapy, infections and skin inflammation.