Uzoma, 23, explained that his phone was stolen and he joined the gang to raise money to buy another one and resuscitate his dying business. 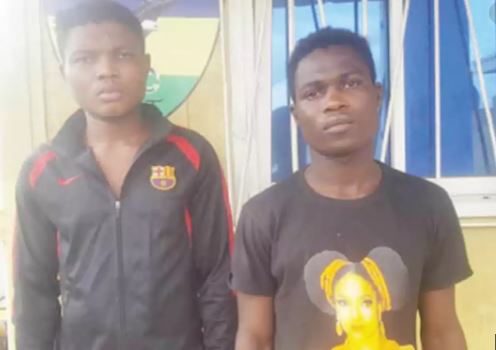 A second-hand cloth and footwear dealer in Ojota, Lagos State, Promise Uzoma, has been arrested by the police for allegedly robbing a businessman in Aba, Abia State.

According to PUNCH, Uzoma also reportedly raped the man’s housemaid and fled with N250, 000, jewellery worth N3.9m and phones among other valuables.

He was apprehended alongside his gang member and cousin, Chukwuebuka Ogubuike by operatives of the Inspector-General of Police Intelligence Response Team.

City Round learnt that luck ran out on the suspects recently after the duo and other members at large attacked the businessman, Nwokebuike Augustine for a second time in his house at Umugbsi area of Aba Town, Abia State, and robbed him of his valuables including mobile phones and jewellery worth about N4.4m.

It was gathered that the gang had robbed Augustine sometime in 2018.

He wrote a petition to the police and the IRT detectives led by DCP Abba Kyari went after the suspects.

“The robbers stole gold jewellery valued at N3.9m, a sum of N250,000; Nokia and Samsung phones valued at N200,000 and expensive perfume and sneakers valued at N100,000, from Augustine’s house. Two members of the gang were arrested after weeks of investigation,” a source told our correspondent.

Uzoma, 23, explained that his phone was stolen and he joined the gang to raise money to buy another one and resuscitate his dying business.

He said, “I sell cloths and footwear at Ojota Market in Lagos State. I used to buy wears at Ariaha Market, in Aba, but few months ago, my phone was stolen in Aba town while I was sleeping in one of my trips and someone took me to a native doctor who said he could prepare charms for me that would make the person who stole my phone to return it.

“I bought the phone for N70,000 and the native doctor asked me to pay N30,000 for the charm and I gave him the money, but seven days after I made the payment, the person didn’t return my phone. I went back to the native doctor and informed him that his charms didn’t work and he asked me to pay additional N7, 000 so he could consult his oracle to know why his charms didn’t work. I refused and insisted that he should refund my money and he told me that he has given my money to his gods.

“He later gave me the money which I used to place a bet but I lost. I got frustrated after I lost money to gambling then one of my friends, known as Udo approached me and told me about a robbery operation. He promised me that I would replace my lost phone after the operation and raised some money for my business.”

Uzoma stated that Udo asked him to invite one other person and he brought in his cousin, Ogubuike.

He said Udo asked him and Ogubuike to enter the businessman’s house while he (Udo) waited outside.

“He told me that he once robbed the man and that the man knows him very well. When we got to the man’s compound, we met the doors open. We entered and pointed our guns at him. He gave us N250, 000 and brought out his gold jewellery because we threatened to kill him if he didn’t cooperate.

“I don’t know what came over me; I then raped his housemaid. I also wanted to rape his wife but I left her because she was a nursing mother,” Uzoma added.

He explained that he got a Samsung phone and N100, 000 as his share from the robbery, adding that it was after he was arrested that he knew the jewellery was worth N3.9m.

Ogubuike, an ex-inmate, said he resolved to turn a new leaf having being remanded in prison twice but was persuaded to go for the recent operation leading to his rearrest.

He stated, “I have been to prison twice. The first time was in 2017 when I bought two stolen laptops. I was arrested and spent three months in prison. After I returned from prison, one of my friends gave me links to work as a security man for a lawyer and after working for him and he refused  to pay my salary, I stole his wife’s bag and his phone. I spent one month in prison and when I came out, I vowed to turn a new leaf.

“The boys who brought the job (robbery operation) told me I would make enough money from it. After the operation, I got only N100,000. It was Uzoma who raped the home help.’’