Shocker! Man Collapsed And Dies While Jogging In Lagos (Photo)


In what will come across as a really shocking development, a man has slumped and died while jogging in Lagos. 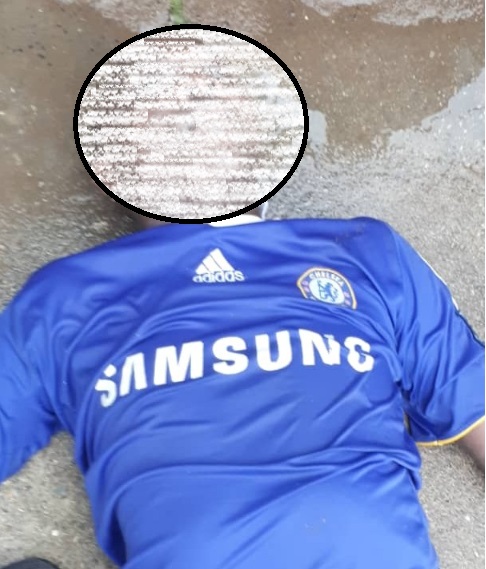 The man died while jogging

According to a report by Punch Metro, a yet-to-be-identified man collapsed and died while jogging on Sunday morning on the WEMCO Road, in the Ogba area of Lagos State.

It was gathered that the man collapsed due to suspected cardiac arrest and efforts by the people around, who rushed to his rescue, proved abortive as he died on the spot.

In the footage of the incident made available to our correspondent by an eyewitness, the lifeless body of the man, who wore a Chelsea jersey and a white pair of trainers, was seen lying on the pavement as rain fell on it.

An eyewitness, Ayobami Adedeji, told PUNCH Metro that the man started gasping immediately he fell on the pavement, but efforts to get emergency responders to the scene proved abortive.

He stated that the man could have been saved if a medical expert had responded to him on time, adding that he died despite the cardiopulmonary resuscitation performed on him.

Adedeji said, “I was jogging in the morning along the WEMCO Road, Ogba, around 6.30am, when I suddenly heard people shouting behind me. When I looked back, I saw a man lying on the floor and people started gathering to attend to him.

“I knew it was an emergency, so I moved closer and saw the man gasping; the people who rushed to his rescue and I did a cardiopulmonary resuscitation procedure by applying pressure to his chest, because it was obvious that he had suffered cardiac arrest while jogging. The man struggled to regain consciousness, but unfortunately, he didn’t and he died.

“I was fortunate to have my phone on me, so I called the emergency lines for over an hour but nobody showed up. I called the 747 and was told that responders were coming, but when we didn’t see them, I called again and the lady, who picked the call, started apologising. I became angry and started shouting at her that the emergency unit at Alausa was not far from the WEMCO Road and it was Sunday morning and there was no traffic anywhere.”

When contacted, the General Manager, LASEMA, Dr Oluwafemi Oke-Osanyintolu, said the man suffered suspected cardiac arrest while jogging, adding that his remains had been evacuated to the mortuary.

He urged Lagos residents to consult their doctors before embarking on any strenuous exercise to prevent health problems.

Oke-Osanyintolu said, “The man suffered suspected cardiac arrest; when we received the call, we contacted the SHEMU to evacuate the corpse. The corpse has been evacuated. We are appealing to everybody who wants to exercise to endeavour to do the basic tests to ascertain their fitness.

“They should also talk with their doctors on the type of exercise they can be involved in. We also appeal to Lagosians to use the facilities provided by Governor Babajide Sanwo-Olu to take good care of their health.”