A man who had the nerve to offend police officers in Lagos state has found himself in the Kirikiri prison. 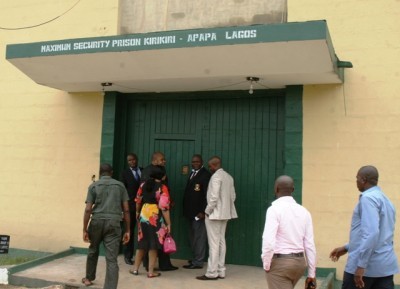 A 30-year-old applicant, Sulaimon Agboola, who pleaded guilty to throwing stones and bottles at police officers on duty,  has been remanded at the Kirikiri Correctional Facility, Apapa, Lagos, NAN reports.

Magistrate M.O. Tanimola ordered in Ikeja on Friday that the defendant should remain behind bars pending review of the facts of the case and sentencing.

Tanimola adjourned the case until Oct. 31 for  review of the facts and sentencing.

The defendant, who has  no fixed address, was arraigned on charges of conspiracy, membership of an unlawful society, assault, breach of the peace and possession of hemp.

The Prosecutor, Insp Aondohemba Koti, had alleged that the defendant conducted himself in a manner likely to cause breach of the peace by selling weeds suspected to be hemp and gathering hoodlums smoking weeds on the Agege Motor Road in Oshodi, Lagos State.

Koti told the court that the defendant committed the offences in conspiracy with others still at large, on Oct. 17 at 9.45p.m. at  Cappa, Oshodi.

He said that the defendant managed an unlawful society and threatened violence to police officers on patrol by throwing stones and bottles at them while performing their lawful duties.

“The defendant tried to resist arrest when he was caught with weeds suspected to be Indian hemp.

” He resorted to fighting the police officers by throwing stones  and bottles at them.

“He was arrested while his accomplices took to their heels,” the prosecutor submitted.