Revealed! Davido's Father Is Not Expecting Own Baby, But He Is An 'Expectant Grandfather'


Despite rumors that Davido's father is expecting a baby with his girlfriend, new reports have shown otherwise. 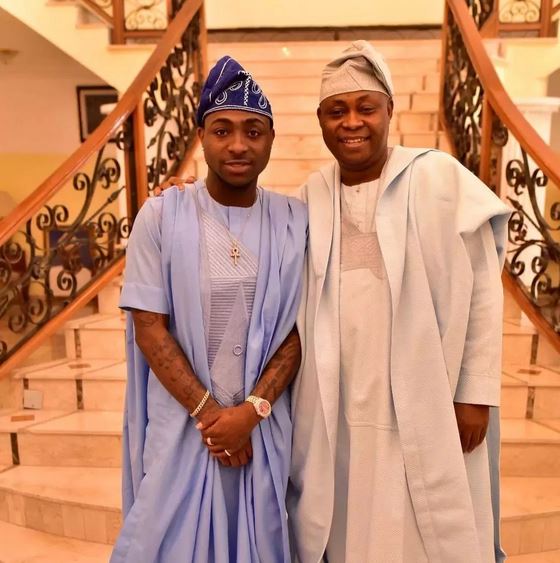 Davido and his father

It has been revealed that Davido’s father, Dr. Adedeji Adeleke is not expecting a baby from a 20 year-old girlfriend, depite rumours claiming that he is.

According to PM News, a spokesman for the family made this revelation known.

Dele Adeleke, reacting from Atlanta, Georgia said on the contrary, Davido’s father is “a new grandfather and an expectant grandfather”.

Dr. Adedeji, he said is a new grandfather by virtue of Davido’s baby son that was born on Sunday by his wife, Chioma and an expectant grandfather as he awaits the birth of the child of Davido’s cousin, Adebayo Adeleke, a.k.a B-RED whose wife is scheduled to deliver soon. Adebayo Adeleke is the son of Senator Ademola Adeleke. In Yoruba culture, Dr Adedeji Adeleke, as head of the family becomes father, grandfather to all.

It will be recalled that blogger Kemi Olunloyo wrote on 23 October that Dr. Adeleke is expecting a child from his girlfriend.

‘So happy for #BabaOlowo Deji Adeleke expecting a baby soon with his girlfriend. This lovely young lady in her late 20’s has been sent to America to coop like Chioma cooped in UK. Davido gets double joy. New baby & new sibling in 12 mos. For the baba ke! A new OBO”, she wrote.

Dr.Adedeji Adeleke is not expecting any child from any younger lover but rather he is a new and expectant grandfather.

“It was Davido who recently had a baby and the entire family is really grateful to God for that and very soon also Adebayo Adeleke a.k.a BRED , an hip-hop sensational artist will be adding another bundle of joy to the family as his wife is slated to put to bed soon”.
Top Stories