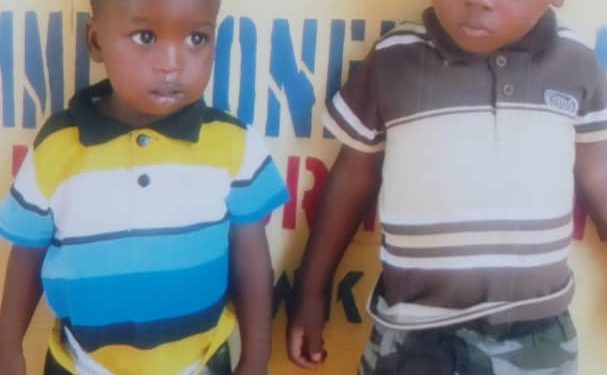 The stolen kids
Three women have been arrested for allegedly abducting two children in Nkpor in Idemili North LGA of Anambra State, a report by TheNation has revealed.
It was gathered that the suspects were apprehended in Nkpor market/Tarzan junction with the stolen children and could not offer satisfactory explanation of them.
The victims, all boys were between the ages of two and four years old respectively.
The police spokesperson, Haruna Mohammed confirmed the arrest.
He said: “Following intelligence report, Police detectives attached to CMU Anambra State Command arrested three female suspects at Nkpor market/Tarzan junction in Idemili North LGA of Anambra State.
“Suspects were arrested with two kids all males, whose ages range between 2 and 4 years respectively.
“They could neither give satisfactory explanation about the children nor where they got them.”
Mohammed added that the case was being investigated after which suspects would be charged.
“The Commissioner of Police, John Abang has consequently urged parents whose children were missing and fall within the age bracket of the recovered children to report at the State Command headquarters Awka for proper identification and collection of their children,” he added.
Top Stories