How A Blind Nigerian Professor Who Lost His Eyes At The Age Of 2 Won N8.8m SUV In Raffle Draw


A Nigerian professor who became blind since he was just two years old has won N8.8 million in raffle draw. 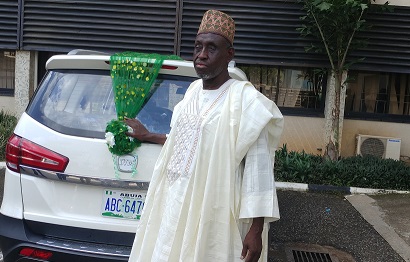 A visually impaired Professor of Education at Bayero University, Kano, Prof. Jibrin Diso, on Friday received a car worth N8.8m won through a raffle draw with 699 other persons, NAN reports.

The Permanent Secretary, Ministry of Budget and National Planning, Mr Ernest Umakhihe, during the hand-over of the car in Abuja, said Diso’s emergence as winner was God’s doing.

Narrating how the visually impaired university don won the luxury SUV, Umakhihe explained that he led a delegation of 700 participants of Joint Planning Board and National Council on Development Planning for a meeting in Asaba, Delta State.

He said that after the two days meeting, a familiarisation tour was undertaken to Innoson Vehicles Motor plant at Nnewi to see the level of commitment of the company to manufacturing industry towards the nation’s economic diversification.

He stated that as a show of appreciation for the visit, the Chairman of the company magnanimously donated a brand new IVM Ikenga model vehicle to the delegation.

The permanent secretary said there was confusion regarding how the owner of the car could emerge among 700 participants.

According to him, in order to determine ownership and ensure transparency, the council decided to use a raffle draw where Diso emerged a winner.

He added that it was God’s involvement for the visually impaired person to emerge winner in ‘699 no and one yes’, “the professor was lucky to pick the yes and he won’’.

Umakhihe congratulated the winner of the vehicle and also thanked IVM for the support to the national economic development.

He reiterated the government’s commitment and determination to support and encourage the local industries through the implementation of the local content’s policy in ensuring patronage of “Made in Nigeria’’ products.

Responding, Diso thanked the ministry and IVM for the donation and described his emergence as the winner as an act of God.

He said he was grateful to God who made it possible for him to partake in the national assignment where he had the opportunity to participate in the raffle draw and later won.

“I also thank God for making me visually impaired and then gave me the opportunity to turn my disability to ability.

“I must also state it clearly that it is not easy for a visually impaired person to become a professor in this country because of several challenges,” he said.

Diso, who said he became blind at the age of two, advised other people living with disability not to relent or discouraged to contribute their quotas to the development of the country.

The professor of education enjoined government at all levels to provide opportunities for those living with disabilities to partake in government and governance of the country.