Security operatives have apprehended a teenage boy who killed a rival cultist during a violent clash. 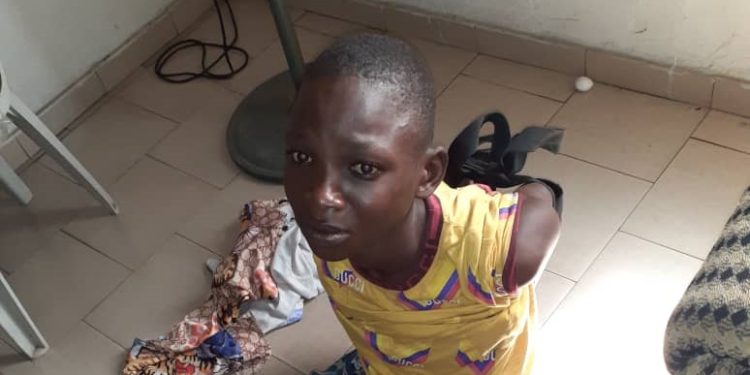 Adewale Ayuba
A 16-year-old boy, Adewale Ayuba, has been arrested by officials of the Lagos State Neighbourhood Safety Corps (LNSC) for allegedly killing his mate during a cult clash in Ijanikin, according to TheNation.
It was gathered that the incident occurred October 21 during a fight between Oto Awori Secondary School and Government Secondary School boys.
Ayuba was said to have stabbed one Abdulahi Wasiu on the chest killing him on the spot.
According to the Public Affairs Officer (PAO) of the agency Olawale Afolabi, LNSC officials at Vespa received information and notified policemen at Ijanikin Ijanikin Division who moved to the scene.
“When LNSC operation team got the information, they notified Ijanikin police station. The police in conjunction with LNSC took the deceased to the hospital. The boy that committed the offence ran away but he was fished out and arrested by our men who handed him over to Ijanikin police station for further action,” said Afolabi.
This is just as policemen attached to Alapere Division on Saturday morning arrested four suspected cultists including a woman said to have lodged at a hotel in the neighbourhood.
It was gathered that the suspects identified as Dare Taiwo, 26, Ayomide Adebanjo, 22, Odunayo Akinsanmi, 28, and Babatunde Akinsomi 32 were arrested at Money Mack Hotel, Oshogu in Alapere.
The police said a locally made pistol was recovered from them during a search, adding that they would be charged to court after investigation.
In another development, policemen at Akoka arrested two suspects in separate burglary attempts.
One of the suspects, Binuye Femi, was said to have been seen around 1:20am Saturday scaling a fence at students’ hostel at 63, Community Road, Akoka with intent to commit felony.
The other one Adekunle Osun, 35, was arrested around 3:45am on Saturday for breaking through the ceiling at 28, Shobande Street, Akoka to steal electronics and money from one Loso Ojo.
Top Stories