Commotion As Fire Breaks Out At FIRS Headquarters (Video)


A huge fire outbreak has been recorded at the headquarters of Federal Inland Revenue Service in Abuja. 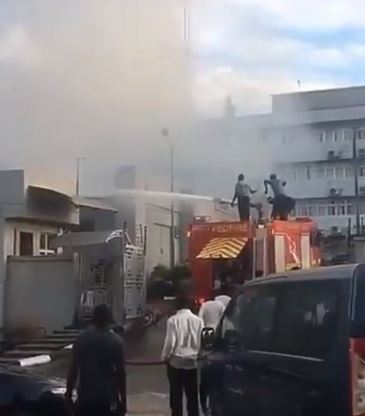 According to Premium Times, a fire incident occurred at the headquarters of the Federal Inland Revenue Service in Abuja on Monday, officials said.

The inferno gutted a store attached to a canteen used by the agency’s staff members at the headquarters’ annex.

Wahab Gbadamosi, a spokesperson for the revenue office, told PREMIUM TIMES of a “small fire outbreak by the store near the FIRS canteen, by Annex 1.”

“Firemen who put out the fire are investigating the source of the fire,” he added.

Footage seen on social media showed firemen standing atop a fire truck and pouring water as thick smoke billowed from a patch of the building.

Mr Gbadamosi said additional questions seeking clarification about whether or not crucial or sensitive material were affected would be answered later.

Watch a video from the incident below: