Similarly, Van Dijk was seen leaving the dressing room with ice on his leg after the game. 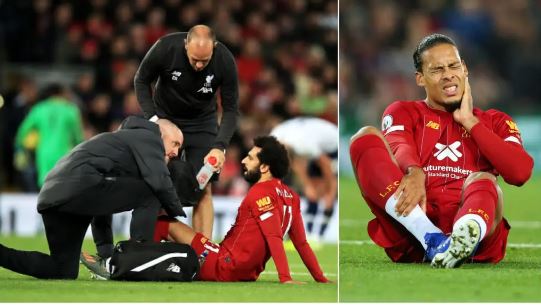 Liverpool manager, Jürgen Klopp, has played down fears that both Virgil van Dijk and Mohamed Salah picked up injuries during Sunday’s 2-1 win over Tottenham Hotspur.

Salah, who netted the winning penalty, was withdrawn shortly before full time after appearing to have aggravated his ankle injury. Similarly, Van Dijk was seen leaving the dressing room with ice on his leg after the game.

Speaking to ​Sky Sports after the game, Klopp admitted he was not concerned about either injuries. The Liverpool boss, however, said he was aware that ​Salah’s knock will likely need some more treatment.

“For Mo, it’s the same ankle. It gets sore the longer the game goes, but it’s not a massive issue. It will disappear one day, but at the moment, it’s still a bit there.

“It had no influence on him during the game, but then the longer the game goes, the more intense it will be. If it starts again, then that’s it.”
Top Stories