Zaha Accused Of Diving Against Arsenal


The Gunners had raced into a two-goal lead early in the first half, thanks to Sokratis and David Luiz. 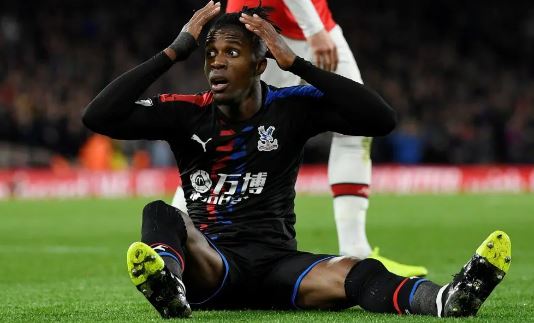 Former Premier League referee, Mark Clattenburg, has said he was “puzzled” by the decision of the Video Assistant Referee (VAR), to award Crystal Palace a penalty in their 2-2 draw with Arsenal on Sunday.

The Gunners had raced into a two-goal lead early in the first half, thanks to Sokratis and David Luiz. However, referee Martin Atkinson awarded Palace a penalty, after initially showing Wilfred Zaha a yellow card fora dive.

Clattenburg told Daily Mail: “VAR left me puzzled at the Emirates Stadium on Sunday. I’m still lost as to why they got involved to award Crystal Palace a penalty against Arsenal when, in my opinion, Wilfried Zaha clearly dived.

“Referee Martin Atkinson was right to book the Palace man for simulation. He was in a perfect position to make the call, too. Calum Chambers’ leg was planted and Zaha threw himself to the ground. Atkinson spotted his ploy and produced a yellow card.

“Then VAR got involved. They told their man on the ground to overturn his original decision and award a spot-kick instead. It was a gift for Palace.

“Then in the last 10 minutes, Sokratis scored to make it 3-2, only for VAR to chalk it off. Meanwhile, those at home and inside the stadium were left trying to work out why.

“Australian Jarred Gillett was the video official at Stockley Park and I would love to have heard his reasoning.

“VAR awarded three penalties on Sunday, with Manchester United receiving two. On Saturday, Brighton became the first club to have one awarded this season that was not originally given by the referee.

“This suggests the system is going to be used differently from now on. Maybe Mike Riley, the head of the PGMOL, is feeling under pressure.”
Top Stories