Woman, Child Escape As Building Collapse Due To Landslide In Umuahia


A woman and her child along with others have escapaded tragic death due to a landslide in Umuahia. 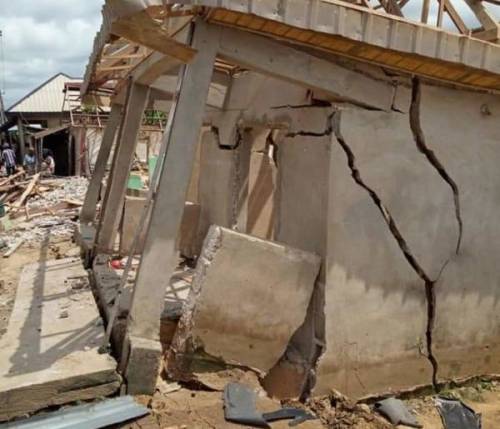 According to a report by NAN, a major disaster was averted on Monday night at Umuchime Amuzukwu-Ibeku in Umuahia North Local Government Area of Abia, when a landslide destroyed a building in the area, while the occupants – a nursing mother and her child – escaped unhurt.

Narrating the incident to newsmen on Tuesday, Mrs Ijeoma Emmanuel, said that the incident happened around midnight.

Emmanuel said that she felt a vibration on the ground, followed by a major crack on the wall of their building.

She said that moments after she stepped out of her building with her baby to ascertain the cause of the vibration, the building collapsed right into the deep gully behind it.

She expressed gratitude to God for sparing their lives.

Other residents of the area said that the disaster had destroyed many homes and farmlands in the area since it first occurred two years ago.

A civil servant, Mr Azubuike Jinanwa, said that many houses and farmlands in the area had been swept away by the disaster.

Jinanwa said that more buildings and farmlands were presently under serious threat by the phenomenon, causing palpable panic in the community.

He said that the landslide first occurred about two years ago, when property, including buildings and farmlands, worth millions of Naira was destroyed.

He described Monday’s incident, involving the nursing mother and her child, as colossal but thanked God that no life was lost.

Jinanwa said that the problem had gone beyond the capacity of the individuals and community and appealed to the state and federal governments to come to their rescue.

“I’m appealing to government at all levels to come to our aid and help us in this time of great need,’’ he said.

Also, a clergyman, Mr Patrick Asiegbu, said that residents of the area now lived in fear, especially whenever it rained.

Asiegbu said that the disaster had defied individual efforts to checkmate it, including tree planting and fortification of perimeter fences with concrete pillars.

He said that the situation had become more precarious and called for government’s urgent intervention.

A housewife and mother of three, Mrs Ifeoma Nkemakolam, described her condition as helpless, regretting that she had no money to relocate her family out of the danger zone.

Nkemakolam said, “I am appealing to the federal and state governments to come to our help.’’