Disability rights advocate has accused a passenger airline, Asky Airlines of destroying her motorised wheelchair and refusing to take responsibility for the damage. 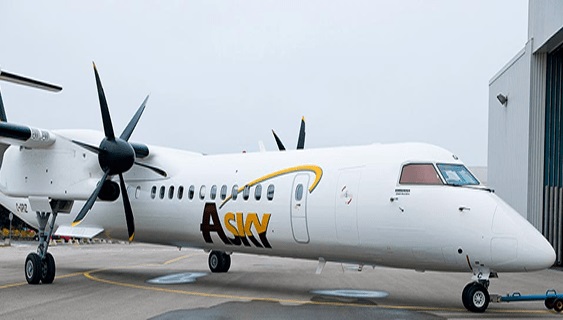 Blessing Mary Ochiedo, a disability rights advocate has accused a passenger airline, Asky Airlines of destroying her motorised wheelchair and refusing to take responsibility for the damage.

On the 15th of August, 2019, Ochiedo flew the Togo-based airline from Abidjan to Abuja. On landing at Nnamdi Azikwe Airport, she discovered that the wheelchair’s hand control was shattered. Ocheido said she notified an official of the airline of the damage and he reluctantly agreed to repair.

A month later, on the 13th of September, an Asky staff brought the hand control claiming that it has been fixed but Ocheido discovered that it was just a paper tape wrapped around the shattered hand control.

After that incident, Ocheido said she called Asky about fixing the damaged hand control of her wheelchair.

Eventually, she was told to find someone to fix it while they would pay. However, it was later discovered by the repairer that the wheelchair’s hand control was damaged beyond control and would need to be replaced.

Ocheido’s chat with an Asky representative

On October 16, Ocheido forwarded the invoice sent by the repairer to Asky Airline. In a chat with the Airline contact person, Ocheido stated that she had to travel to Cairo without a wheelchair, which was an inconvenience and something she had never tried before.

Her messages were left unattended to. According to Ocheido, Asky later called her to say that the manager had received the invoice and “they will see what can be done about it”.

Ten days later, Ochiedo went to the Asky counter to ask for an update on her wheelchair. She explained to them how their negligence had cost her two important meetings and the stress she had had to endure since August.

Ochiedo, the founder of Ramp Up Nigeria said the situation with Asky Airlines was one of the most “cruel and insane things” she had ever gone through in her life.

“Asky has treated me despicably without an iota of consideration for my rights and welfare. I intend to stage a protest upon my return.”

She is also no longer asking for the repair of the wheelchair’s hand control but for a new motorised wheelchair as compensation for the pain and disrespect she had had to endure to since August.

“I am no longer demanding that the hand control be fixed as it looks irreparable,” Ochiedo said.

“I’m asking to be compensated with a brand new motorised wheelchair considering the trauma and disregard I’ve endured since August 15, 2019.

“Everyone knows how expensive motorised wheelchairs are and I’m far from rich, so I cannot just up and buy another one.”

Ocheido is also asking that Nigerians come to her aid in the fight against Asky Airline’s gross disregard for persons with disabilities.

“I’m calling on all well-meaning Nigerians to help me fight this aviation company that believes persons with disabilities do not count, from the way our mobility aids are manhandled to how cases of damaged properties are resolved.”

When The Guardian contacted the airline’s headquarters in Togo, our reporter was directed to its Nigerian offices in Abuja and Lagos. The official who spoke to The Guardian said she knew nothing about the damaged wheelchair.

An official of the airline in Abuja, where Ocheido landed, said the Lagos office was in a better position to answer questions relating to the incident.

The two phone lines provided for the Lagos office were not available as at Wednesday morning.