The mid-night raid came as a surprise, many fled into the thick forests but these unlucky suspects were nabbed by the NDLEA. 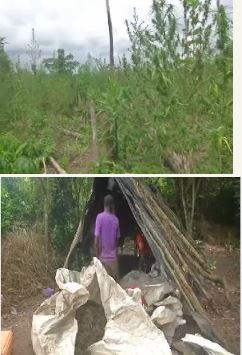 Oyo state government has been charged to beam its searchlight on the Gbeerede, Odo-Kurodo and Aba-Tade community of the Oluyole local council district notorious for the cultivation of Indian Hemp.

This call is coming on the heels of a recent discovery of about Six hectares of cultivated Cannabis ready for harvesting and valued at several millions of Naira.

Correspondent Olutayo Famous Cole reports that the latest discovery shocked officials of the national drug law enforcement agency who have been taken aback at the sight of this cannabis farm ready for cultivation.

Deep in the heart of Bare community of the Oluyole local council district is this massive expanse of Land with no end,had this weed found its way to the streets,many destinies might have been cut short.

The mid night raid came as a surprise,many fled into the thick forests but these unlucky suspects were nabbed by the NDLEA.

The NDLEA has vowed to burst the drug syndicate and rid the society of drug use and abuse. It however wants cultivators to engage in more viable crops that can do the society more harm than good.