Trump Shares Fake Photo Of Hero Dog Getting A Medal


A conservative website produced the image, replacing the retired army medic who actually received the honor with the dog's head. 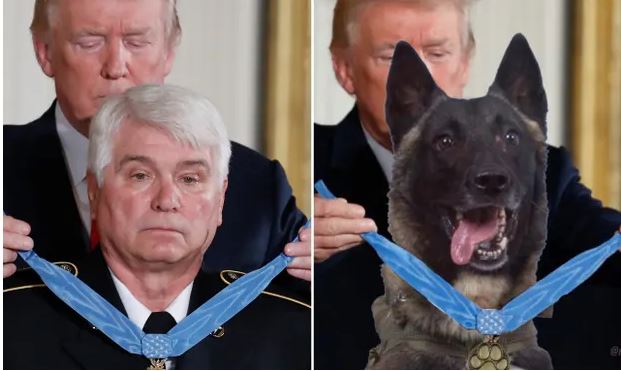 Donald Trump has tweeted a fake image of himself awarding a medal of honor to the military dog involved in the raid that killed the Islamic State leader Abu Bakr al-Baghdadi, and apparently declassified the dog’s name.

The image, apparently produced by the Daily Wire, a conservative site, is an altered version of an actual photograph of Trump awarding the medal of honor in 2017 to James McCloughan, a retired army medic who was honored for saving the lives of 10 people during the Vietnam war, the New York Times reported.

The medal of honor is the most prestigious military decoration awarded to US service members for extraordinary acts of valor.

In the image tweeted by the US president, McCloughan’s head has been replaced with the head of the dog, named in media reports as “Conan”, with his tongue hanging out of his mouth.

When Trump first tweeted the dog’s photo Tuesday, he said the pooch’s image was declassified, but its name wasn’t. But early on Thursday morning, he appeared to confirm the dog’s name was Conan, without saying if it remained classified.

He also said the dog would leave the Middle East for the White House next week.
Top Stories