An ex-military chief reportedly diverted a whopping N1 billion meant for schools and hospitals for himself. 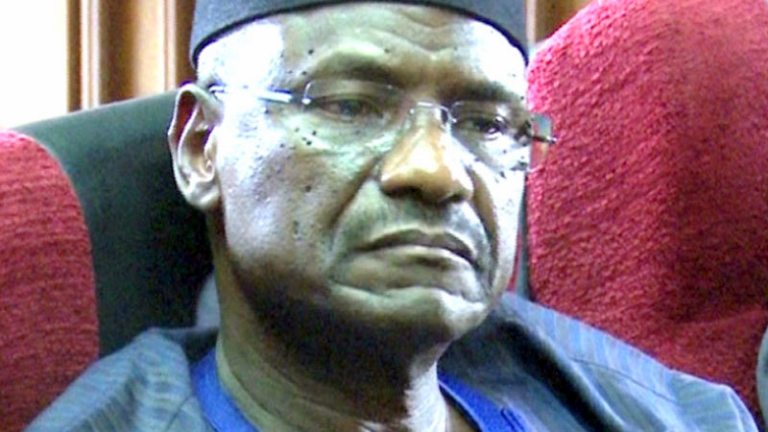 According to Premium Times, Nigeria’s former air force chief, Umar Dikko, converted about N1 billion public funds to build a house for himself, a witness told a court on Thursday.

Hammadama Bello, the 9th prosecution witness in the ongoing trial Mr Dikko, told the court that the defendant allegedly converted N1.2 billion, belonging Nigerian Air Force, to his personal use.

Details of the court proceeding were contained in a statement by the spokesperson of the anti-graft agency, EFCC.

The retired air vice marshall is being prosecuted at the Federal High Court, Maitama, Abuja, presided by Nnamdi Dimgba.

Mr Dikko is being prosecuted by the EFCC on a seven-count charge bordering on money laundering and procurement fraud to the tune of N9.7 billion.

Under cross-examination by the defence counsel, Onyeachi Ikpeazu, the witness who is an investigator with the EFCC, said that funds meant for air force’s operational purpose were diverted by Mr Dikko to his personal use.

“In addition to the project listed above, the defendant Air Marshal Umar Dikko, helped himself by carrying out some project for himself, like his house in Maitama, which amounts to almost a billion naira,” Mr Bello was quoted as saying.

He further noted that a case of alleged money laundering was established against the defendant following the results of investigations into properties linked to the former Chief of Air Staff.

Mr Bello said that all directives regarding the disbursement of NAF’s funds came from Mr Dikko to the Director of Finance and Accounts, who was assisted by the chief finance officer, Bukar Abubakar.

He stated that Mr Abubakar was in turn assisted by a Squadron Leader, Emmanuel Agbor, and a number of other junior cashiers, adding that the former air chief gave directives in the absence of the Director, Finance and Accounts.

At the previous court sitting, Mr Bello had told the court how some properties were allegedly purchased by the defendant.

“Although the defendant (Dikko) claimed he bought the property for N35 million, investigations revealed that the property was originally a guest house of the Nigerian Air Force, which was sold to one AVM Lex.

“Upon questioning, AVM Lex confirmed that he had been approached by one Yushau, who told him that the buyer preferred to stay anonymous and N85 million (Eighty-five Million Naira), was paid to AVM Lex, for the property and another N75 million paid for renovation of the same,” Mr Bello added.

According to the witness, the investigations also revealed that the former Chief of Air Staff came from a humble background, rising from the position of a teacher, then a library assistant, before becoming a serving officer and then the Chief of Air Staff and wondered how he could have acquired such properties.

“He (Dikko) was not a businessman while in service and would have to be Chief of Air Staff (at his last grade level) for 250 years to be able to afford the properties linked to him.

“Investigations revealed that during Mr Dikko’s tenure as Chief of Air Staff, he received N558.2 million on a monthly basis, which he converted into dollars,” Bello stated.

According to the witness, searches conducted on companies linked to the defendant at the Corporate Affairs Commission, (CAC), and several bank accounts, revealed that none of the accounts of these companies were used directly or indirectly for the purchase of the properties.

“On the monies transferred to the account of Capital Law Firm, the legal agent engaged for the purchase of the defendant’s Asokoro property, Mr Bello stated that investigations revealed a trail of about N900 million, which was paid in cash, as being payment for the property and N40 million in legal fees and additional monies (in dollars), were paid to the agent’s account for the renovation of the property,” the EFCC stated.

With the conclusion of cross-examination, Mr Dimgba discharged the witness and adjourned the matter till November 1for continuation of hearing.