It was revealed that the boys were adopted from a Motherless Baby home in Jos, Plateau State where they were allegedly sold for N140,000. 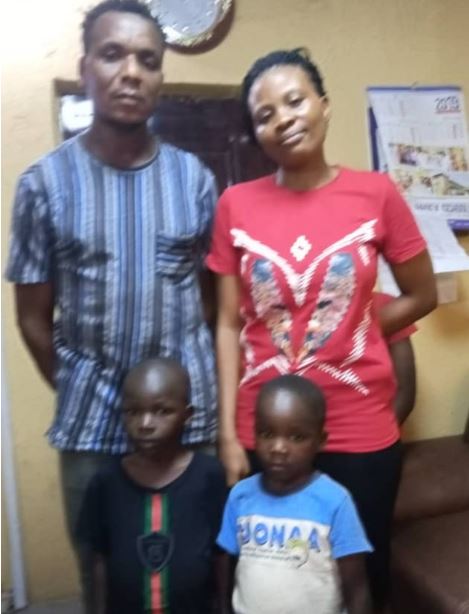 The Police in Lagos has arrested a couple who allegedly stole two children of ages six and three respectively.

The couple, Mr Chukwunoso Happiness and Mrs Chukeunonso Blessing, were apprehended in an alleged attempt to take the children to Anambra state, over a yet-to-be ascertained reasons.

Vanguard gathered that 30-year-old Blessing was sighted last Friday, at Alaba International market, along the Mile-Two/Badagry expressway with the children, both boys, later identified as Joshua James( 6) and Samuel Gbawune (3), at about 8.30 pm.

She was at the verge of boarding a bus to Onitsha, Anambra state, when some curious persons who suspected the sinister move, due to the expressions on the faces of the children, reportedly contacted policemen at Ojo division.

During interrogation, she claimed that the boys were adopted by her husband whose identity she gave as Chukwunoso Happiness, from a Motherless Baby home in Jos, Plateau State. She explained that she was taking the children to Onitsha to meet her husband.

The Lagos State Police Public Relations Officer, DSP Elkana Bala, however, revealed that when Blessing’s husband was arrested at about 7 am, next day ( Saturday), he confirmed everyone’s fear.

The Lagos police noted that the couple claimed they bought the children for N140,000.

According to Bala, Blessing said “her 40-year-old husband said he bought the children for N140,000 from one Mama Oyoo, of Jos township.

“The children have been rescued and are with us. Efforts are emplaced to identify their parents and reunite them. The Command hereby calls on Motor Park Operators, Unions and well-meaning Nigerians to keep an eye on passengers with kids that appear in a suspicious manner”