2023: Atiku's Associates Want Him To Run For Presidency Again


Giving his reasons, he said Atiku stood a brighter chance to clinch the presidency since President Buhari would not be in the picture again as he was serving out his last term in office. 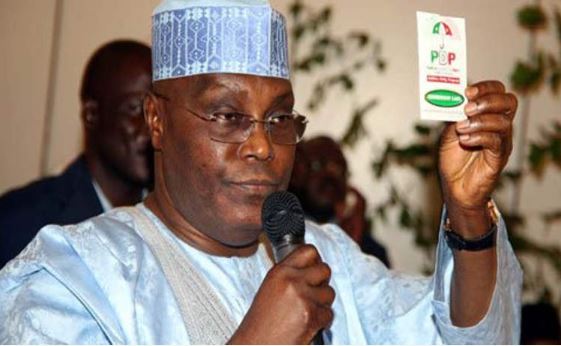 Associates of Atiku Abubakar, presidential candidate of the Peoples Democratic Party (PDP) in the 2019 polls, are already mounting pressure on him to take another shot at the presidency in 2023.

This followed the failure of his suit against President Muhammadu Buhari at the Supreme Court on Wednesday where his request to reverse the outcome of the 2019 presidential election was thrown out.

Speaking with an Independent correspondent, one of Atiku’s long-time political associate said they were already talking with him and hope to convince the former vice president to try his luck again in the next presidential election.

Giving his reasons, he said Atiku stood a brighter chance to clinch the presidency since President Buhari would not be in the picture again as he was serving out his last term in office.

He also said that with the way things were going, the possibility that APC would implode in 2023 was very high.

“Since the outcome of the 2019 presidential election in February, some of us who believe in Atiku and know he has good plans for the country have been looking at the possibility of his seeking re-election in 2023.

“Some of us know since Buhari has been declared winner by INEC, it will be an uphill task for any court to upturn the verdict. We have been vindicated by the Supreme Court ruling.

“Now that we have put that behind us, we will be talking to Wazirin to try his luck again. There is this popular saying that ‘quitters don’t win’.

“Our belief is that if Buhari had given up like he did in 2011 when he said the presidential election would be his last, he would not be president today. Power doesn’t come easy.

“The calculation now is that Atiku is the most popular politician in the PDP right now. If he decides to contest again, I don’t see any gang-up that can stop him from getting the party’s ticket. Remember, some people tried it in Port Harcourt last year but they failed woefully.

“If he can get the PDP ticket, I don’t see any politician that the APC will field that Atiku can’t defeat. We all know that Buhari has a cult following in the North and that greatly helped him in 2015 and 2019. That factor will no longer be there in 2023.

“By the way, how are we sure APC can survive till 2023 with all that is happening in the party right now?”

When asked if age and fatigue would not be a limitation to Atiku’s chances should he decide to contest since he would be 76 by 2023, another chieftain of the PDP who also wants Atiku to contest in 2019, said there was no age limit for those seeking to be president of Nigeria.

“One thing you should realise is that there is no age limit to contest for the highest office in the land.

“Besides, Atiku never said the 2019 election would be his last. Don’t also forget his reaction after the Supreme Court judgment. He said he was a democrat, he is a democrat, and he will always be a democrat. That statement is loaded.

“Also, can any man look at Atiku and say he is too old at his age? Even right now, the man doesn’t look like a 72-year-old at all. In fact, he is much stronger and fitter than some politicians who are claiming to be 67 years old,” he said.

He, however, said while Atiku, as a committed statesman, would never be tired of proffering solutions to Nigeria’s problems, the decision as to whether to contest again would be entirely his to make.

He said: “It is not on record and I’m not aware of such comment (that the 2019 presidential election would be his last bid). What I know for a fact is that whatever it is are the challenges that Nigeria faces, those challenges continue to constantly be in our faces and we are all aware of them.

“So, as a statesman and a very committed one at that, Atiku is interested in the growth and development of the country. One can never be tired of proffering solutions.

“In terms of whether this is going to be his last election, this is personal decision he has to make for himself. And, of course, if he is going to contest, it will also be within his rights as enshrined by the constitution of the Federal Republic of Nigeria.”

Also speaking on the matter, Elder Anthony Sani, Secretary-General of the Arewa Consultative Forum (ACF), said: “There is no upper age limit placed by the constitution for those who can contest for the presidency of this country.”

On his part, Yinka Odumakin, National Publicity Secretary of Afenifere, said only God could decide what the future holds.

“Only God knows what tomorrow holds for everyone. Buhari said he was done with the contest in 2011, only to win in 2015. We humans cannot play God in these matters. Only He knows those who are planning for 2023 but will not see 2020,” Odumakin said.