Bank Manager And His Wife Arrested For $1.49million Scam (Photo)


A bank manager and his wife have been apprehended by the EFCC for alleged scam of $1.49million. 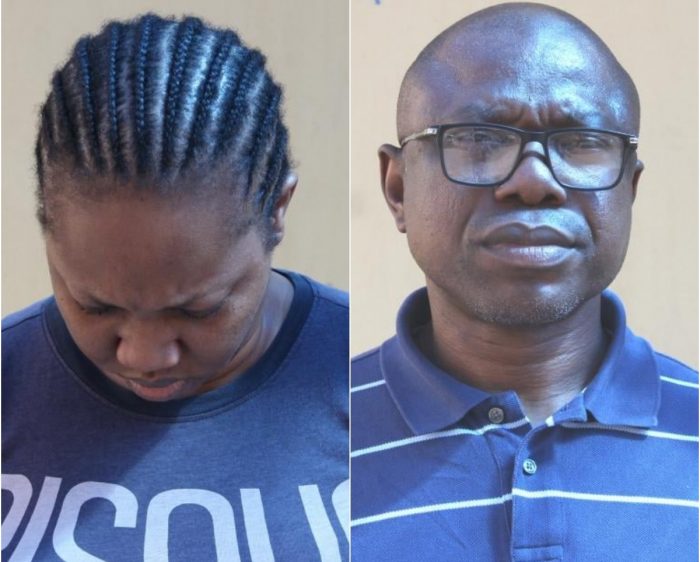 Rowly Isioro and his wife Ovuomarhoni Naomi Isioro
A former bank Assistant General Manager, Rowly Isioro and his wife Ovuomarhoni Naomi Isioro, have been arrested by the Economic and Financial Crimes Commission for fraud.
The EFCC alleged that the couple laundered $1.49million transferred to Ovuomarhoni’s bank account from America.
Their arrest followed a petition received by the Commission from the Federal Bureau of Investigation (FBI), through the office of its Legal Attache, United States Consulate, Victoria Island Lagos.
The FBI petition claimed that the couple was involved in computer related fraud, stealing and money laundering.
According to the EFCC, further investigation revealed that the said sum was transferred into Isioro Ovuomarhoni Naomi’s bank account in Nigeria in several tranches.
The commission told The Nation that Naomi met one Michael Uziewe, who is still at large, in Atlanta, Georgia, United States of America sometime in 2016, and introduced her to foreign exchange business.
“Naomi has, however, confessed that she and her husband operate two firms namely: Marhoni General Services Limited and Multaid Plus Limited with which they to received money from the America-based Michael, who allegedly owns Global Investment network.
“She confirmed to the operatives that she has been receiving dollars with instructions to pay the naira equivalent into accounts provided by the said America-based Michael.
“Facts have also emerged that each time Naomi receive the dollars, she makes over the counter withdrawals, disregarding the requisite due process which demands that such transactions should go through the regular bank transfer system and sell them to Bureau de Change operators for naira equivalents.”
The EFCC further alleged that Mr Isioro, “with over 22 years of experience has also confessed that he was aware that someone his wife met in United States of America used to send her dollars which she disburses the naira equivalent to various accounts on the instruction of the person in America,” the Commission added.
The Nation gathered that Mr Isioro was relieved of his job when the bank became aware of his alleged activities.
“The suspects have been charged to court and would be arraigned soon,” the EFCC said.
Top Stories