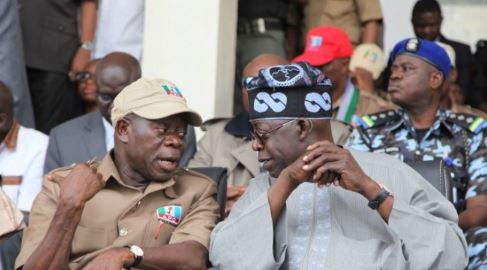 Facts emerged on Monday on why some stakeholders in the ruling All Progressives Congress (APC) are demanding the removal of Adams Oshiomhole, national chairman of the party.

Speaking with a Daily Independent correspondent, a member of the party’s National Working Committee (NWC), who preferred not to be named, said those calling for Oshiomhole’s removal were doing so because of the intrigues associated with the 2023 presidential election.

According to him, many of those behind the call were afraid Asiwaju Bola Tinubu, a national leader of the party, who is reportedly nursing presidential ambition in 2023, might easily get the party’s ticket with Oshiomhole in the saddle as national chairman.

He said the focus of Oshiomhole and other members of the NWC was the forthcoming governorship elections in Kogi and Bayelsa, which are coming up in less than two weeks.

“All what is happening is about 2023 politics. All those demanding Oshiomhole’s removal are not really after him; they are after Asiwaju Bola Tinubu, who many believe is nursing the ambition to succeed President Buhari in 2023".

“Some northern elements, in collaboration with some disgruntled former governors who have an axe to grind with Oshiomhole, are the ones behind all these. They don’t want Tinubu as APC candidate in 2023, so they are afraid he may pick the ticket if Oshiomhole remains the national chairman".

“They are not really targeting the national chairman; their main focus is Tinubu who they are determined to stop at all cost from clinching the APC presidential ticket in 2023,” he said.

While confirming reports that some stakeholders of the party had approached President Buhari on the need to have Oshiomhole replaced, he said the president told them in clear terms to show appreciation for the role the former Edo State governor played not only in sanitising the party but leading the APC to victory in the 2019 presidential election.

“It is true that some stakeholders approached the president on the issue of the national chairman, asking that he should be replaced, but the president shunned them, saying he was satisfied with his performance so far, especially in the area of instilling discipline in the party".

“He told them if APC stakeholders are fighting in Imo, Rivers, how is it Oshiomhole’s fault? He told them right now, APC needs a firm leader who can continue to reposition the party for greatness.

“The president is even bothered that why should party members be fighting about 2023 when we just finished an election in 2019?


“He was furious with those who came to demand Oshiomhole’s removal, saying he was the man who led the APC to victory in the just concluded general elections.

“He also reminded them all through the court cases on the outcome of the presidential election. Oshiomhole was always in court even on the day of the Supreme Court judgment while many of those who are calling for his removal were sleeping in their houses.

“So, the national chairman is not bothered by all these attacks. In fact, he is expecting more of these attacks in the days ahead as we approach the 2023 general elections,” he said.