'You'll Keep Having Sleepless Nights For Your Sins' - Okorocha To Gulak


Okorocha accused Gulak of saying he had earlier stated that he ran away from his assignment in the state over kidnap threats. 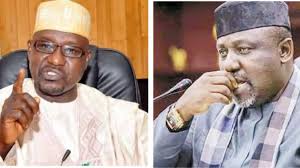 Rochas Okorocha, the former governor of Imo State and member representing Imo West Senatorial District has said the Chairman of the All Progressives Congress (APC) 2019 Primary Election Committee in Imo State, Ahmed Gulak, will continue to have sleepless nights until he openly confesses his crime regarding his role in the party’s governorship primary in the state.

Gulak had, in a chat with newsmen, alleged that Okorocha offered him $2million bribe to deliver certificate of return to his anointed aspirant and son in law, Uche Nwosu. He also said he rejected the bribe because of his integrity, arguing that it was free money he would have collected without anybody dragging him to court.

But in a statement by his media adviser, Sam Onwuemeodo, the former Imo governor said Gulak’s story was an afterthought because he had not slept well since absconding with the election materials and destroying the party in the state.

According to Okorocha: “He (Gulak) murdered sleep and has remained awake. In other words, his latest claim is just to ease the tension his action has generated in him, since then. He won’t have rest until he does an open confession for the political crime he committed in Imo.

"He cannot be a model. And he has nothing to offer to the nation’s democracy. Both history and posterity have returned unfavourable verdicts against him and he cannot help the situation.”

Okorocha also accused Gulak of speaking from both sides of his mouth in his latest bribery allegations, saying he had earlier stated that he ran away from his assignment in the state over kidnap threats.

The former Imo governor added: “This same Ahmed Gulak had claimed at a press conference in Abuja on Tuesday, October 2, 2018 that he absconded from his room 701, at Rockview Hotel Owerri by 4am that day because, agents of the former governor had wanted to kidnap him. He ran away leaving other members of the Committee behind.”

And that was the day the primary would have held after he had announced that Monday, October 1, 2018 being the actual date for the primary was no more feasible because he arrived Owerri by 2pm, met with stakeholders by 8pm at Police Headquarters Owerri, which lasted till 11:35pm. And he went on courtesy call to the then governor with his team by 11:58pm.

And the courtesy call lingered till 1am. They went back to their hotel, only for him to abscond by 4am, by his own account. And that was the genesis of Imo APC problem. So, at what point was the bribe given?  “At his press conference too, he declared someone winner of a Primary he never conducted.”