UPDATED: Commotion As Fire Breaks Out In Balogun Market


Some update has been provided into the story of the huge fire outbreak recorded at Balogun market, Lagos. 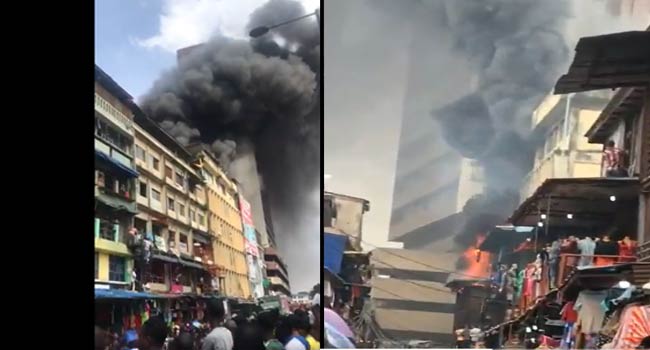 Earlier today, we reported that fire has gutted a shopping complex on Martin Street on the Lagos Island area of Lagos State.

Now, a report by The Punch has shown that men of the Lagos State Emergency Management Agency and Lagos State Fire Service have been deployed to put out the inferno.

Many traders, Punch Metro learnt, had been struggling to salvage some of their goods from the burning building.

The cause of the fire and the extent of damage had yet to be ascertained as of press time.

The spokespersons for LASEMA and the fire service, Nosa Okubor, and Adeleke Ashimi, respectively, confirmed the incident.

However, Ashimi added that another complex on Dosumu Street, about 500 meters from Martin Street, was also on fire.

“Our men are on their way there as well. We don’t know the extent of the fire yet,” she added.