Fani-Kayode said Ali belongs to the stone age for his comments on the closure of Nigeria's borders. 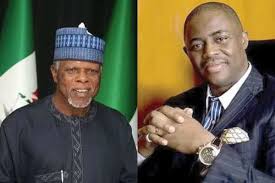 Former Minister of Aviation, Femi Fani-Kayode says the Controller General, Nigerian Customs Service, Colonel Hameed Ali (rtd) belongs to the stone age over his comment on the closure of the nation’s borders.

Ali had said: “This is the Government that has insisted that we must grow Nigeria, eat Nigeria. China that we go there to buy almost everything we use, closed their bothers for how many years? They closed it for 40 years to the whole world and today they are great China. Don’t you want to be great Nigeria?”

Reacting, Fani-Kayode said Ali “belongs to the stone age. May God deliver us from the debilitating gullibility and crushing ignorance of these Buharists.

“When China closed her borders to the world, did Chinese Heads of State and leaders travel abroad for treatment for weeks and months on end when they fell sick?

“Did they travel to foreign countries at the drop of a hat and go there to tell foreign leaders and the foreign media long tales about how rotten, lazy and corrupt their people were?”

Fani-Kayode continued: “Did they kill local businesses, industries and commerce, crush the entrepreneurship spirit of their people and impoverish local businessmen and manufacturers who were trying to produce “made in China” goods?

“Worse of all, did they target their enemies in the business community and create massive monopolies for their relatives and friends? Honestly this Hameed must go back to school!

“Has protectionism and closing your borders ever boosted a nations economy? China’s strength lies in her willingness to trade with the outside world and in the size of her population and market. The fact that most of the world has access to that market and that they have opened theirs to China in return has made her very rich.”