The National Drug Law Enforcement Agency has identified Rotimi Akeredolu's town and other places as the flashpoints for peddling Indian hemp. 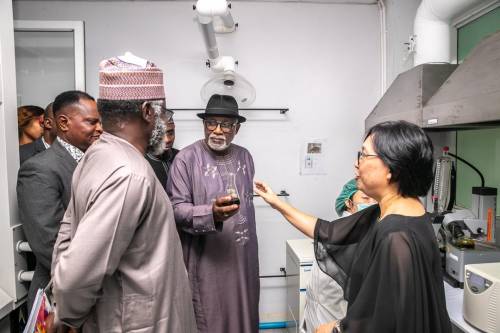 Gov Rotimi Akeredolu and NDLEA Boss, Abdallah were in Thailand to learn how to grow cannabis

According to SaharaReporters, the National Drug Law Enforcement Agency says it seized at least 11,692 kilograms of illicit drugs in Ondo State.

According to the anti-narcotics agency, the drugs included Indian hemp, tramadol, cocaine, etc., Haruna Gagara, the Ondo State Commander of the NDLEA, told SaharaReporters on Thursday in Akure, the state capital.

Gagara noted that the drugs were seized between January and October this year.

He said, "The command destroyed drug totalling 11,692 kilograms, and the substances were seized at different flashpoints of Ondo township, Ogbese, Owo, Ore, Iju among several others.

"Ondo state is the only state in South West Nigeria with high cultivation of Indian hemp. This is evident in the seizures made by the command every passing year."

Gagara added that out of the 222 suspects arrested, 42 were prosecuted and convicted.

Gagara explained that measures were in place to reduce the high rate of supply of illicit drugs during the yelutide season in the state.