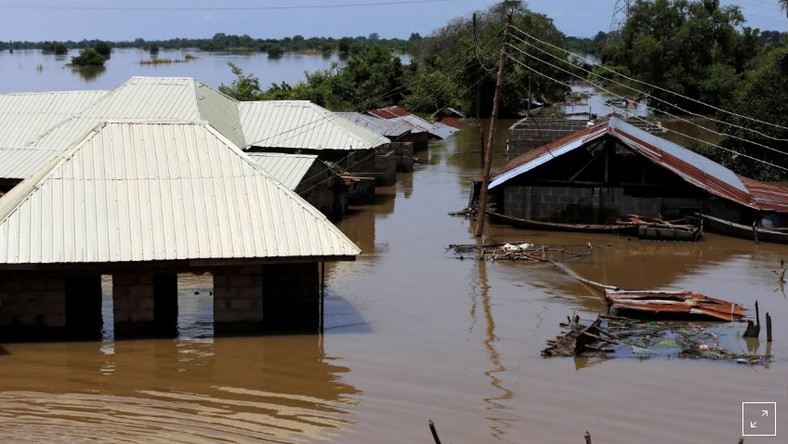 No fewer than 3,000 houses in Etsako Central Local Government Area of Edo State were submerged by flood, following a surge in River Niger due to the release of water from Lagdo dam in Cameroon.

The News Agency of Nigeria reports that many hectares of farmlands with cash crops and property worth millions of naira were also destroyed.

Some of the victims, who spoke with NAN, blamed the flood on the rise in the water level of the River Niger.

One of the victims, Mr Sunny Emokpa, expressed shock over the incident, saying that the entire communities were now flooded.

“Our farmlands have been destroyed, while houses have been submerged by water, thereby rendering us homeless.

“Our schools are now at the mercy of the flood as pupils have to manage to get to the class, while some are completely out of school as the water had gone beyond what the children can manage.

“We are appealing to the Federal and State Governments for help,’’ Emokpa said.

Another victim, Mr Sunny Eshemoboh, told NAN that he lost his entire property to the flood.

“The flood has wreaked havoc on our buildings; as you can see; our houses have been submerged by the flood.

“We are appealing to the relevant authorities to come to our aid,’’ Eshemoboh said.

Mrs Rita Akinabor said that she lost all her farm produce to the flood.

“I invested N500,000 in cultivating my farm and I am now worried that just at about harvest time, most of my crops have been washed away by the flood,’’ she said.

The Vice-Chairman of the Local Government Area, Mr Ambrose Akhigbe, said the council had commenced the clean-up of the Federal Government’s resettlement camp for Internally Displaced Persons in Oghomere with the aim of relocating the flood victims to the area.

“The council is doing all it can to relocate the victims after proper cleaning of the buildings to enable them feel at home.

“We have reached out to relevant agencies to provide relief materials to the camp for the affected victims,’’ he said.

NAN reports that in 2018, over 1, 000 houses were submerged and hundreds of people displaced by flood in the area.