Founder of social media platform, Twitter has stormed Lagos on a tour of Africa. 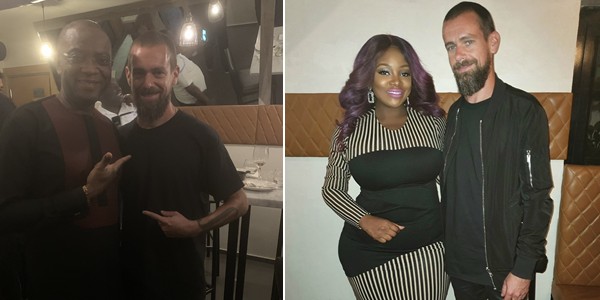 Jack Dorsey
Jack Dorsey, Twitter CEO and Co-founder, has arrived in Nigeria as part of his listening and learning tour across Africa.
The Twitter CEO will be visiting Nigeria and other African countries during his tour of Africa that he said will last the entire month of November. Other countries he will be visiting are Ghana, Ethiopia and South Africa.
Although Jack Dorsey's planned visit to Africa was known, his itinerary was a secret until he appeared in Lagos today.
He was hosted to a dinner which he confirmed of his Twitter page that he enjoyed. Photos of Dorsey posing with Dr. Joe Abah, Toolz of Beat FM and others has merge online. Dorsey attempted to speak Yoruba in a video that Toolz posted on her Twitter page.
Watch video: