A woman has ended up setting her house on fire while she was trying to make some 'Ofada' sauce for her husband. 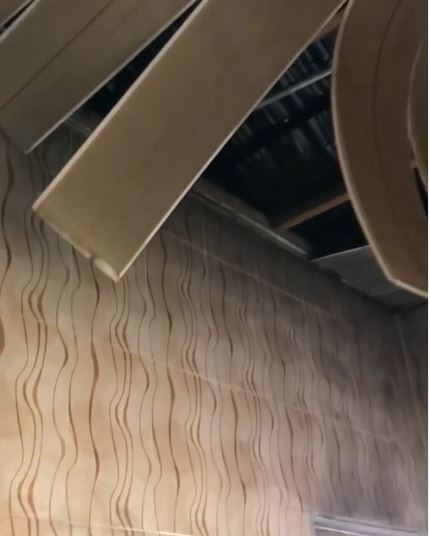 The woman's house after the incident

A Nigerian woman has told an interesting story on social media, revealing how she set her house on fire while trying to make some Ofada sauce.

The woman identified by the Instagram handle "jeyz_beautyspot", explained that her husband had always craved Ofada sauce so she decided to make some for the man.

However, in the process of making it, she nearly burnt down the whole hose.

She wrote: "My reality few weeks ago..let me give u guys a little story.

"So I decided to test my skills small and be a good wife to hubby as he has been craving ofada sauce for a while. With all the happiness in my heart I decided to cook it

"I opened the kitchen door and fire was everywhere o inside the pot I was sooo confused I ran into the bathroom took a bucket of water and poured it into the pot, and VOOM! the flames went up and became worse and bursted the ceilings!

"Na so I just ran to my sitting room grabbed my son who was sleeping on the couch and ran out of the house to call for help. We had no extinguisher at home! All I kept saying “ our house is gone ” “we are going to be homeless” lord help me” I kept crying and screaming till the neighbors came and help put out the fire.

"The incident made us realize the importance of the extinguisher we took for granted we had to go buy it immediately. Pls every home needs an extinguisher cos anything can happen at any time. An also pls whenever there is a fire NEVER USE PLAIN WATER! IT WORSENS THE FIRE!!!! I learnt that too."

Below is a video she shared of her house after the incident.