A gorgeous Nigerian actress has shared with the world details about her marriage that crashed after 3 years. 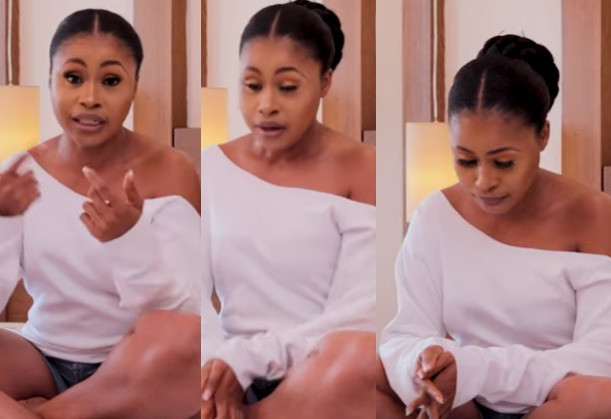 Padita Agu
Beautiful Actress, Padita Agu in a video she shared on her YouTube Page has shared the sad tale of how her 3-year-old marriage packed up!
Padita narrated how she got married to her ex-husband the very first day they met after maintaining a long distance relationship over the phone.
According to her, she met her ex-husband at a friend’s house. She had gone to the friend’s house to console her and this friend later called to tell her that the man who was in her house when she came visiting, was interested in her and wanted her number.
Padita who was in a relationship at the time, said she turned down her friend’s request to speak with the man. Her friend pressured her so much and she gave into her friend’s request and decided to speak with the man.
At the time they spoke, the man was living outside the country. After much communication via phone, they started to talk about marriage. It was in one of their many conversations that he sold her an idea that she says she regrets till date.
”This guy and I have been talking over the phone and we got to the point of agreeing to be married. So he decided to sell me this wonderful idea, that how about we go on some adventure, lets get married the very first day we get to see because all this while we have been taling, I don’t remember his face. I haven’t seen him. He just saw me once when I came to my friend’s place to consolde her. He might I seen me in my movies, I don’t know. All I know is that at this point, we don’t really know each other. We haven’t seen each other but we have been talking over the phone. I don’t remeber his face, I don’t remember how he looks but we have been talking so we are so familiar but not just facially.

So he said okay, how about we try some adventure, we arrange a marriage and we just see ourselves right at the registry when we are getting married. I was like wow, that’s deep, that is serious. I was like what would my family say? What would I say to them> I was just scared but excited at the same time. So he said for my family, we don’t have to tell them about the secret marriage. So once we are done, we would go and meet them as though we were just dating and we tell them we want to get married and we take it from there.
So once we get married, maybe years later, if we had kids and all that, we can now open up to them and say ‘oh by the way, we had a secret wedding. At that point, it wouldn’t matter because then, we are already married. And as for him and I, once we do it and we meet ourselves and we realise we don’t want this anymore, as quietly as we did it, we would just go and undo it.
So I thought to myself, there is no harm in this. If we don’t want it again, we dissolve it quietly like he said and my family don’t have to know because eventually we would wed properly. So, I thought it was a nice idea.
So, I went to the regustry because he was out of the country at the time. I went to the registry,got us registered. The day came, it was my birthday. He also chose my birthday to make it special. So I felt wow, this is amazing. That day I didn’t tell anyone. In between, he told me not to tell anyone. that if I tell people, nobody would encourage it for some negative reason. Some might be jealous.
On the wedding day, I arrived at the registry with a cab. He arrived with a cab. The cabman who brought me signed as my witness while the one who brought him signed as his witness. and we wedded. From their, we went to see my family to tell them we were dating and wanted to get married.
The marriage lasted for three years and that three years is the worst I have ever gone through in my almost four decades of living to the point I attempted suicide. I just wanted to kill myself and end it. There was this thing about actresses not staying in marriage so I just couldn’t see myself leaving and so I just wanted to stay there. Since I couldn’t leave, I thought I should just end this whole trouble. I know some of you would be like this is why this girl left the industry. Yes, this is why I left the industry. He didn’t tell me to leave directly but indirectly, he got me out of the industry, cut me off everyone, everything…my career, my school, my family, friends…ecept friends he was okay with them”
Padita recounted how her ex-husband told her that their marriage was legal and any attempt to annul it, would cause them to incur the wrought of God down to their fourth generation and that she would bear most of the wrought as the wife.
Amongst the lessons Padita says she learnt form the experience is
1. Never give in to pressure be it parental, peer group or societal.
2. Never assume you are familiar with someone you are chatting on talking with on phone or social media. This goes to people in long distant relationships. Never commit deeply until you see that person.
3. Never settle for a spouse you are not compartible with
4. Never leave in Isolation.
Watch the video of her sharing her experience below:
Top Stories