A man who hynotizes his victims with charms before robbing them has made a startling confession in Lagos. 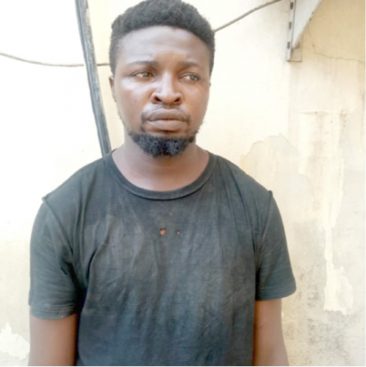 According to Daily Trust, a 24-year-old suspected pickpocket, Monday Francis, arrested by operatives of the Lagos State Anti-Robbery Squad (SARS), has explained how he had been successfully removing valuables from the pockets or bags of his victims without the knowledge of the owners.

Francis said when succeeding in his pickpocketing job was getting more difficult, he decided to introduce the use of charms into it.

“I met a juju priest who promised to give me a charm that he called ‘Touch and Go’. He said that with the charm, anyone I touch won’t feel anything when I dip my hands into his or her bag or pocket,” he added.

Francis said that with the help of the charm, he did not need to struggle too hard to rob commuters boarding commercial buses of their belongings, or tear hand bags to remove from therein money, phones and other valuables.

The Benue State-born suspect stated that he had been operating with his magic ring since November 2018 and had made over N3 million on the job.

“With these rings (pointing to the rings recovered from him) I can detect if a person has money on him, or is wearing gold jewelleries. They are not ordinary rings but strong juju. An alfa gave them to me. I met the alfa at the Alaba Rago market, Ojo, last November at a joint where we smoke marijuana.

"He told me that rather than subject myself to so much suffering, he could help me get rich by giving me something that would better my life.

“At the end of the sacrifice, he gave me the rings and charged N50,000 for his service. But I told him I did not have such an amount with me. I promised to pay him more than that when the rings start fetching me money.

“He told me he was travelling to his home town in Togo and would collect the money when he comes back. But I have never seen him since then. Before he left, he advised me to always renew the potency of the charmed rings with the blood of a cock every three days. He also warned me never to eat draw soup and that I should never sleep with a lady who is observing her menstrual flow. Since I started using the ring, I have been performing sacrifice with a cock every three days.”

The Lagos State Police Public Relations Officer, Bala Elkana, who confirmed the arrest, said the suspect would be charged to court at the end of investigation.

"I Hope The Change We Want In This Country Comes Soon Enough, Too Many Young Dreams Are Dying" - Fireboy
Recent Stories