A young Nigerian female graduate has made history as she launched a mobile car wash in Kwara. 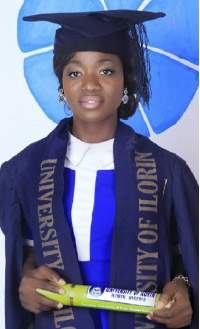 Sun News, a young graduate from University of Ilorin, Naomi Jibrin, has ventured into a male dominated business to emerge the first female mobile car wash operator in Ilorin, the capital of Kwara State.

Naomi, an indigene of Idah, in Kogi State, told Daily Sun why she decided to set up the business and also narrated the challenges she has faced.

“I am the second child of a family of four. I was born on 29th August 1995 and attended my primary and secondary education at Great Michael’s Comprehensive College before I proceeded to University of Ilorin, where I studied Food Science.

“I started making money at age 18 by selling peanuts from house to house at Bonny Island in Rivers State. The personal drive came up when my father lost his job. My dad lost everything he had and things became tough for us.  Even to feed was difficult for my family. It was then I told myself I will go out and work with my hands to make money.

“Having an automobile washing company has been one of my passions ever since I got an opportunity to work in a car wash some years back. But due to lack of funds to bring it to pass, I decided to start a mobile car wash service,” she said.

She then appealed to government to assist young entrepreneurs, especially in the area of accessing loans from commercial banks to expand their businesses.

A trader at Murtala Mohammed Way, Ilorin, Chris Onaolapo, expressed joy over Naomi’s entrepreneurship.  He disclosed that he had patronised her more than twice and she did a good job on his car.

“She charges moderately. I like her courage and want to enjoin other youths to emulate her. This is better than getting involved in crime,” he said.