The former president voted in Polling unit 39 of ward 13, but the opposition, All Progressive Congress (APC) cleared the unit massively. 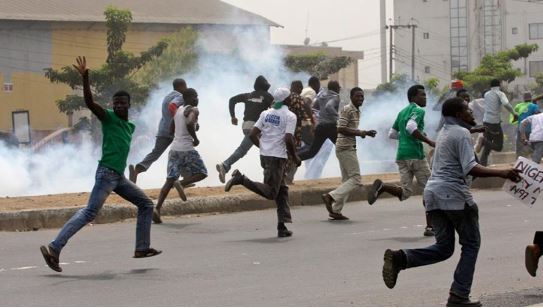 Ahead of declaration of results in the Bayelsa governorship election, fresh violent activities are being reported on Sunday, in Ogbia local government and other areas of the state.

Ogbia is the country home of former President Goodluck Jonathan.

But the former President is believed to have withheld support for his party, the Peoples Democratic Party (PDP), over disagreement with Governor Seriake Dickson, who ensured Duoye Diri was sponsored as the party’s candidate against Timi Alaibe, the candidate of Jonathan.

The former president voted in Polling unit 39 of ward 13, but the opposition, All Progressive Congress (APC) cleared the unit massively.

The APC also cleared all the polling units in Otuoke Ward 13, the ancestral home of Jonathan.

Agents of the PDP and those of the APC were said to have engaged in free for all fights as a result of alleged attempts by APC agents to force fake results on the Independent National Electoral Commission (INEC)’s officials.

Hijacking of electoral materials and results also continues to greet the collation process, with the latest report indicating that INEC officials and sensitive materials for Nembe local government area, Mini Ward 11, Ikensi Ward 12, and Oluasiri Ward 13 were hijacked and have been allegedly taken to houses believed to be of two APC chieftains, where the officials were reportedly forced at gunpoint to sign result sheets.

As of the time of filing this report, collation at the state headquarters, Yenagoa, for the eight local government areas, have not commenced, as results from various areas, including Ogbia, are still being collated.