An Air Namibia plane collided with a Korean Air jet after landing at Frankfurt airport on Saturday evening, officials said, adding that no one was injured. 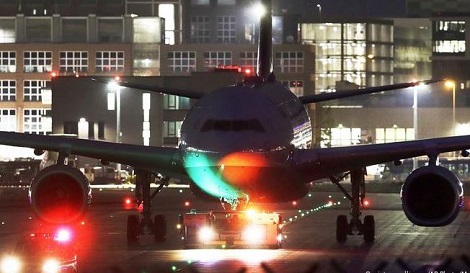 A Korean Air Boeing 777 aircraft collided lightly with an Air Namibia aircraft after landing on Saturday at 6.20 p.m. (1720 GMT).

The horizontal stabilizer on the Korean jet and the wingtip of the Namibian plane were both damaged, according to the Korean news agency Yonhap.

There were no reports of injuries as the Air Namibia plane was "moving at low speed on the ground," the agency said, citing the Korean carrier.

The Korean plane — which was scheduled to make a return flight to Seoul — was delayed as a result of the incident and passengers were offered hotel accommodations, reported the Frankfurter Allgemeine Zeitung newspaper.

The flight was rescheduled and was expected to take off some 21 hours later than originally planned.

The German Federal Bureau of Aircraft Accident Investigation (BFU) launched an investigation into the collision, reported the Hessenschau news portal.