Unbelievable Tales Of States Where Learning Takes Place Under Trees


The stories have been told of the Nigerian states where learning takes place under some trees. 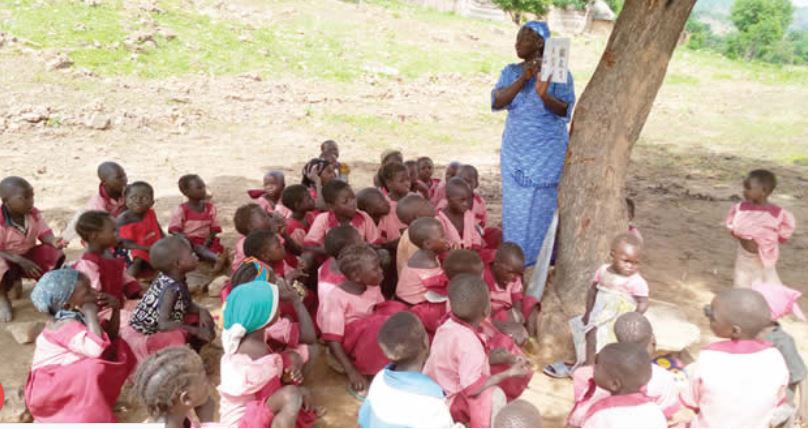 At this stage in the development of Nigerian education, it is unthinkable that schoolchildren are still receiving lessons under the shade of trees, OLALEYE ALUKO and CHIMA AZUBUIKE  report

Tidi and Farin Kasa Primary Schools are typical government-owned basic educational institutions located in the Shongom Local Government Area of Gombe State. They are also among many primary schools across the country that have been neglected and literally abandoned by government at all levels.

Both schools and their pupils suffer for want of the basic of amenities and structures necessary for teaching and learning to thrive.

The primary schools, which are roughly about three hours’ drive from Gombe, the capital of the state, can be accessed only through an abandoned stretch of road that is in dire need of rehabilitation. There are no guards or fences of any kind to prevent trespassers and animals from straying into the compounds.

Each of the schools has only four teachers to handle a population of about 150 pupils, from classes one to six, under circumstances that could best be described as extremely unconducive to teaching and learning.

Some of the buildings housing the classrooms in both schools have collapsed and the few ramshackle ones left are gradually falling apart. To avert a possible catastrophe, the authorities had deemed it necessary to move the pupils out of such buildings to the open where teaching and learning now takes place under the shade of trees.

During a visit to the school, one of our correspondents found three teachers at Tidi Primary School. On his next visit, he met only two teachers in the school. He had to inquire into the constant absence of teachers from the school.

In her response, the Headmaster of Tidi Primary School, Mrs Jemima Dogo, disclosed that inadequate teaching staff and lack of classrooms were the major challenges facing the school.

She said, “As you can see, our compound does not have a fence. As a result, anything can stray into the compound. Also, we have only four teachers to teach a population of 150 pupils.

One of the school teachers, Mr Yunana Wuya, who teaches primary two and three pupils under the new arrangement, complained about the work load.

Stressing that marking two classroom registers at the same time and teaching such a large population of pupils every week was not an easy task, he said, “I have been doing this for two years now. We don’t have enough teachers and text-books to teach. I teach both classes with only one text-book.”

Wuya and one of his colleagues, Mr Alexander Simon, called on the Federal Government to come to the aid of the school.

Also, the District Head of Burak, Garba Gondak, who has jurisdiction over the school, noted that traditional rulers in the LGA were willing to partner the Gombe State Government towards lifting the pupils from their present predicament.

Gondak said, “Governor Muhammad Yahaya is willing to tackle the challenges facing the school and its pupils studying under trees. We traditional rulers are willing to cooperate with him to ensure that parents send their children to school.”

During a visit to Farin Kasa Primary School, the Headmaster, Mr Karimu Daji, told one of our correspondents that he had received investigators from the State Universal Basic Education Board, who came on a fact-finding mission to assess the situation on the ground.

He said, “I was not around when you came on your initial visit, but since your report was published, I have been receiving calls from people who wanted to find out about the position of things. Some of the buildings here were donated by a former member of the National Assembly, Binta Bello, but there were no chairs. We decided to relocate the pupils under the trees because we were afraid that the building might collapse. In no distant time, the building will be completed and furnished.”

A member of the Gombe House of Assembly representing Pero Chonge Constituency, Shongom II, where the schools are located, Samuel Markus, told our correspondent that a seven-man committee had been appointed to check the state of the schools.

He said, “Having seen the level of decay of basic education in my constituency, I was not happy. It is no longer news that Gombe State is rated low in terms of education. What this means is that education has not been accorded the priority it deserves. I have appointed a seven-man committee to check enrollment of pupils, number of teachers, number of out-of-school children and the state of infrastructure in the schools. I will present this working document to the state government and other necessary agencies of government.”

Primary and secondary schools, as well as some tertiary insitutions in Niger State have also been neglected by government. An example is Suleiman Bara’u Science and Technical College, Kwamba in the Suleja area of the state, whose students sleep on the bare floor in dilapidated hostels that lack windows and doors.

The students are also forced to empty their bowels in nearby bushes, in the absence of toilets. In the process, they risk a possible outbreak of diseases at the college.

When one of our correspondents visited the school, the students called for the urgent intervention of the Niger State Government.

One of the students had complained to our correspondents about exposure to mosquito bites. He said, “Mosquitoes come in freely in the evening. Some of us sleep under nets, but because there are no windows, we are often exposed to cold and wild animals.

“When it rains, the water comes in through the windows and floods the room. We cannot find anywhere else to sleep anytime it rains.”

Another student, named John, added, “Students always fall sick here and there are no drugs, except Paracetamol, at the school clinic. We have complained several times to the school authorities. We don’t know if there is anything they are doing about it yet, but we haven’t received any response from them.”

The Niger State Ministry of Education, in its response, confirmed that six technical colleges and five vocational schools require urgent attention and fixing them would cost the government more than N7.4 billion.

The ministry added that it was looking forward to having deals with the Russian and Chinese governments, which would enable it to rehabilitate the infrastructure in the affected schools.

The Permanent Secretary in the Niger State Ministry of Education, Alhaji Abubakar Aliyu, told one of our correspondents that apart from the Suleman Bara’u college, 10 other schools were in need of rehabilitation.

Aliyu said, “It is not just Suleman Bara’u college, we are also looking at all the schools that are in need of rehabilitation. You know that we have over 250 junior secondary schools and 150 senior secondary schools, as well as over 3,000 primary schools. Some of these schools were founded and built more than 40 years ago.

“However, we don’t have enough funds. I know that the state governor has had cause to visit the Russian and Chinese ambassadors with a view to taking a holistic look at the schools.

“We are thinking of partnering with these countries. But if they are not forthcoming, we have to take the work at our own pace. We will take all the 11 colleges, for which we need N7.4 billion. The state government needs a budget estimate of the six technical colleges and five vocational schools to arrive at N7.4billion. We had a consultant who went to do the estimate.”

The Nigerian Union of Teachers has said that the governments of Gombe and Niger states are to blame for the infrastructural decay in the schools. The NUT Secretary-General, Dr Mike Ene, in an interview with one of our correspondents, said that for many years the governments of both states did not show commitment to basic education and they also failed to provide matching grants to access Federal Government funds.

He said, “It is very pathetic that in the 21st century, our pupils are still studying under trees and dilapidated buildings, especially in northern Nigeria. We are saying that even those who are awake did not share in the rabbit meat caught at night, not to talk of those who are asleep.

“If pupils from poor homes come to school and the sun is still beating them under a mango tree for want of classrooms, I don’t know what kind of concentration or assimilation you can expect from such children.

“The learning conditions are not good and the children cannot internalise anything the teachers are teaching them. I advise state governors not to politicise education. They must accept that education is on the concurrent list and a commendable sum must be allocated to it. The NUT commends states that have accessed their UBEC funds and are using it to uplift their schools. Those states that have not utilised the funds are supposed to wake up and build the primary and secondary education which is the foundation of our system.”