Some software engineers who help kidnappers and armed robbers to evade arrest in Edo have been busted. 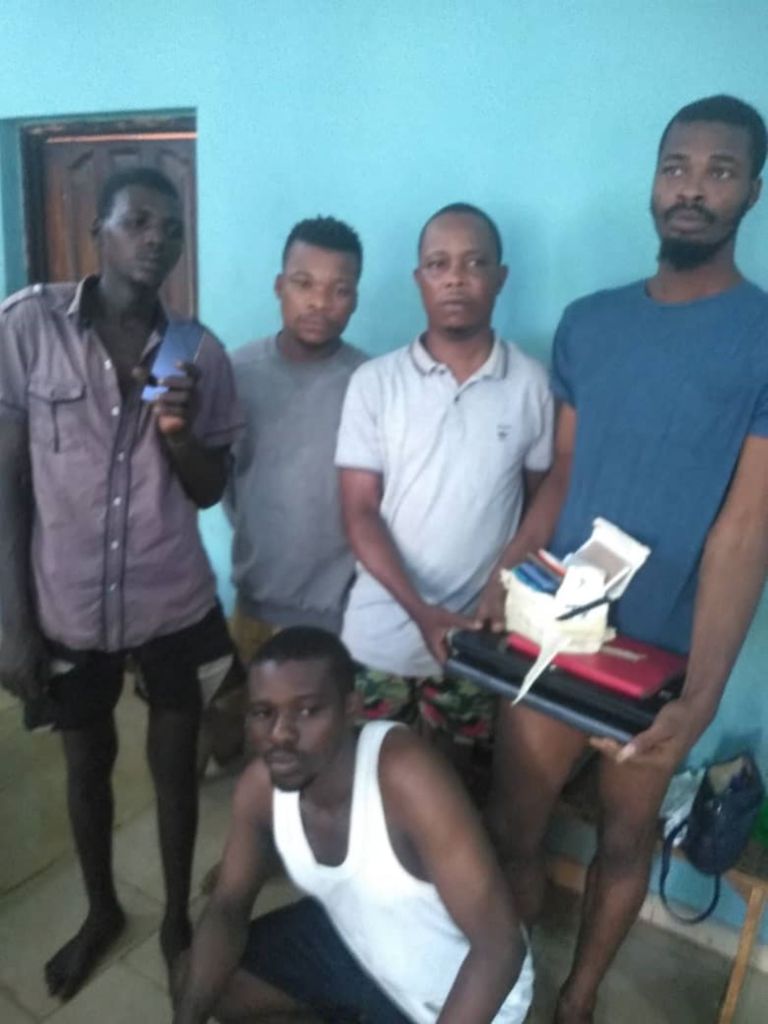 According to a report by Vanguard, as many as four software engineers who specialize in helping kidnappers and armed robbers operating in Edo State, which the serial numbers of stolen phones and those used for ransom negotiations, also known as IMEI numbers, have been arrested by operatives of the Inspector-General of Police Special Intelligence Response Team, IRT, in Benin City Edo State.

Vanguard reports that the suspects, who were identified as Bright Irabo, Benedict Edo, Ernest Ubong and, Christian Egbheri, were all rounded up at the Oba Market in Benin City when the operatives got information about their activities.

A source who spoke to Vanguard on the condition of anonymity disclosed that IRT operatives, led by a Deputy Superintendent of Police, who were deployed to Edo State, to combat high rate of kidnapping and armed robbery in state, have been experiencing difficulty solving most armed robbery and kidnapping cases within the state as robbed mobile phones are usually untraceable as a result of the changed IMEI numbers.

The source explained that the operatives made a breakthrough in tracking members of the syndicate assisting these bandits, when a 24-year-old trader, Othuke Samuel, had his mobile phone snatched from him on his away hone after the close of business.

Samuel was said to have reported the theft of his phone to the police and a manhunt was launched for the thief, Bulama Sani, a native of Jigawa State, who later got unlucky, not recognizing, who Samuel and went to his shop asking to buy from the phone.

Samuel, in an interview, disclosed that “when he brought the phone to me to buy in my shop, I recognized that the phone was mine and when I looked at the boy properly.  I recognized him and I stayed calm and I asked him how much he wanted to sell the phone and he asked me to pay him N150,000.  I then asked him to wait in my shop that I wanted to get some money from the bank and I left him at the shop and went straight to the IRT operatives and came to my shop and apprehended him.”

Vanguard gathered that after Sani confessed that he changed the IMEI of the stolen at the Oba Market, Benin City and so as to make the phone untraceable and he led the operatives in arresting the software engineer who helped him change the stolen phone’s MEI numbers.

It was gathered that the four software engineers arrested during the raid at the Oba market, confessed to been changing IMEI numbers for criminals for a fee of N1000 per phone and one of the suspects Benedict Edo, who is a native of Upoji in Esan area of Edo State and a student of University of Benin, said; “ I am working at Abuma Shopping complex in Benin City  and I repair and flash phones of all kinds  and I do change of phone’s IMEI”.

“ I learned the process of changing phones IMEI from the internet and I am also aware that it was criminals that were always coming to change phone IMEI.  I have stopped accepting the job from customers before the police came to arrest me.”

While Christian Egbheria, a native of Osun in Imo State said he was aware that changing of IMEI of phones was criminal, but he said he engaged himself in the business because the money in it is attractive.  He explained that the process of changing a phone IMEI was easy and all he needed was to access the phone’s software, wipe off the old cold and replace it with a new one.  He added that people come for the job normally bring more than one phone for him to change the IMEI for them.