The best graduating student of Chrisland University has spoken about how she once wasted about 5 years studying Medicine. 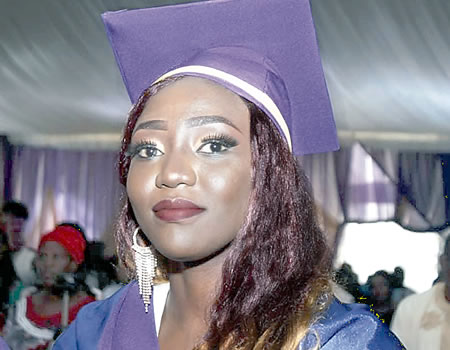 Lauretta Ufuomanefe Onemu is one of the seven pioneer students to graduate from the Chrisland University, Abeokuta, Ogun State – and she emerged the very best, obtaining a perfect CGPA score of 5.0 in Psychology. She speaks with ADEOLA OTEMADE on her experiences.

Tell us a little about yourself and your background

I am from Delta State, but I was born and bred in Lagos. I am the second of four children. I attended Royal Infant Academy, Ojo, Lagos for my primary education and Chrisland College, Idimu, Lagos for my secondary education. I am frequently described as a perfectionist and my favorite food is Jollof rice, fried fish and plantain.

What were your hobbies while growing up?

While I was growing up, my mum used to read to my sister and I. As a result, reading became one of my favorite pastimes. Apart from reading, I enjoyed playing games, dancing, do-it-yourself crafts and play acting. I have many memories of my sister and I pretending we were food vendors and wasting all the bread in the house in the name of merchandise. Now, I think about it. I spent a lot of time pretending I was a salesperson. I wasted a lot of water as well in the name of selling kerosene and groundnut oil.

So why did you decide to study Psychology?

Genuine interest motivated me to study psychology. My first course of study was actually Medicine. I studied medicine for about five years at the Houdegbe North American University, Republic of Benin. In the course of my study, I was exposed to psychology, most specifically clinical psychology. At that time, I found it really interesting, especially the disorders. After some years, there were rumours that the course was not accredited, and so I had to look for a solution. I decided to study Psychology as I had interest in it, and so I wrote the British Council A’Level examinations. I used the results to obtain admission into 200 Level in Chrisland University.

Why didn’t you apply to study the same course (medicine) in another university here?

I believed I had already run out of time to spend another five to six years again on Medicine…and the admission for medicine is quite stressful.

How did your parents react when you told them you were settling for psychology?

My dad is a businessman and he had wanted me to study a business-related course right from the start; so he initially tried to persuade me to study something in the business line. But after I explained what the course was about, he was very supportive and encouraged me constantly. My mum had no problem with it. She was only worried about the slim job prospects for psychologists in Nigeria.

What were the challenges you faced in terms of finances?

I thank God for his mercies throughout my three years at Chrisland University. I did not face any major financial challenges. I was just always worried for my parents because of the state of the economy. But apart from penny-pinching at certain times, I was fine.

Were you fed up at some point?

Naturally, school can be very tiring and I have been at it for a while now. At times, assignments, tests and other events just seemed very overwhelming and I wanted to just give up on everything. At other times, it felt as if time was stretching on forever and I would never get to the end. But God strengthened and kept me till today, and for that I am grateful.

How do you cool off from stress?

How I deal with stress usually depends on what the exact stressor/cause of stress is. When I am stressed out about grades and test/exam performances, I usually talk to my parents, especially my mum. I also confide in my friends and talk to God about it. When dealing with other forms of stress, I try to take a step back from whatever is stressing me and just breathe. I often turn to novels and sometimes movies as a form of stress relief; and I also chat with my friends, listen to music, play games, watch YouTube videos or just spend time on Pinterest.

You maintained A’s all through your stay in school. How did you manage to achieve that?

I will say through the grace of God. This may sound like a cliché, but He was my strength constantly during all the periods of my education. In addition to God’s grace, I focused on finding a reading style that worked for me and I believe that this is what helped me the most. Many people try to copy what other people are doing, but finding your own unique studying style is your best bet always. Another thing I believe helped a lot was always putting in maximum effort on my tests and assignments. I tried my best to ensure that I always did my best work, no matter how little the mark attached to it. Those little points go a long way at the end of the day.

Were you involved in extra-curricular activities, social life, considering the fact you came out with A’s?

Yes I was. I always made an effort to attend social gatherings and events in school, and I was a member of the ushering team in the school chapel. I was also the hall governor as well as the president of the Psychology Association in school. Personally, I don’t believe that being highly involved in social activities automatically denotes a poor academic performance. If you can adequately juggle both, you can succeed in school while also having fun.

Can you share with us one of the experiences you had in school that you would never forget?

There were many memorable experiences during my stay in Chrisland University but I believe the one I will never forget is the final project period. 400 Level was one of the most stressful periods of my life. I was already a bit wary of project as I had heard many stories about it and its perils. During this time, I was expecting that the assignment load would be reduced, but it was just double the work as I had to juggle doing assignments, studying and working on my project. At that time, I did not expect to see the end of the project; it just seemed never-ending. I pushed myself past limits I did not know I had, and we had to stay back in school after vacation to complete our project and defend it. However, it also allowed us, final year students, to bond with one another.