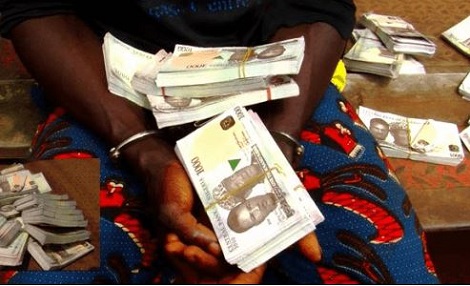 The Ogun Area 1 Command of the Nigeria Customs Service has said it intercepted fake currency notes worth about N2.5m.

Also intercepted by the command were 40 drums of smuggled ethanol.

The command’s Controller, Michael  Agbara, told newsmen that the fake currency was intercepted due to the vigilance of officers of the command.

He said that the ethanol would be subjected to court condemnation while the suspects would  be prosecuted.

He said, “These 40 drums contain industrial alcohol known as ethanol.

“This is strictly stamped by the National Agency for Food and Drug Administration and Control for industrial use but the criminals sold it to the public who mix it with water and take it as alcoholic drinks.

“This is harmful to the health of the people. It is a criminal activity for anyone to convert it to domestic use.”

The fake currency merchant, Samson Odejiba, said he was commissioned by one Alfa to transport the currency to Owode from Idiroko.

Odebija, who is a palm wine tapper, added that he was promised N5,000 for the job.

The controller stated that about 160 jerry cans of 25 litres were being used to engage in the nefarious activity.

According to him, the smugglers hid the tanker in the bush and used other vehicles to shield it from public view.

From the bush, a pipe was constructed and fuel is siphoned from the tankers and fed into jerry cans, he explained.