Drama As Fraudster Disguised As An Official, Defrauds Customer Inside Banking Hall In Lagos


In what will come across as a really startling development, a fraudster who was dressed as a bank official has defrauded a customer inside a banking hall. 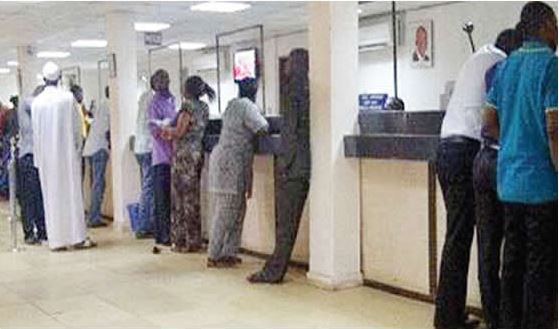 A businessman at Trade Fair Market, Lagos, Mr Taiwo Adebari, is at loggerheads with Fidelity Bank over a N645,000 fraud that occurred at the bank’s branch in the Balogun area of the market, Punch Metro reports.

Adebari stated that the bank had been evasive in refunding half of the payment as allegedly directed by the police.

But an official absolved the financial institution of any wrongdoing, claiming the depositor and the security company – Hogan Guards Limited – working with the bank were to blame.

It was learnt that Adebari, who deals in wristwatches, had sent his son, Sefiu, to deposit the money at the bank on August 21, 2019, around 3.30pm.

It was gathered that Sefiu, 18, filled a teller at the banking hall and was about to proceed to the bulk room to make a deposit when an elderly man asked him for assistance in filling his own teller.

While Sefiu was helping out the stranger, a young corporately dressed man approached him on the pretext of being an official of the bank and offered to help him deposit the money. As Sefiu was busy helping out the elderly man, the well-dressed conman left with the money.

More than 15 minutes later when the man did not return with evidence of deposit, it dawned on the teenager that he had fallen victim to fraud.

Adebari explained that his son returned to the shop crying that he had been defrauded and that the bank manager wanted to see him (the father).

He said, “I told him that (the fraud) was not possible inside the bank. I asked him if he was sure of what he said and he said yes. When we got to the bank, I met with the manager and he confirmed it. I asked him to help me play the bank’s CCTV recording. Lo and behold, it is true.

“I then reported the case at the Trade Fair Police Station. The police arrested the security man at the banking hall. They said such a thing was not supposed to happen inside the bank. They asked what I wanted and I said I wanted all my money back because it was a loan.

“The DCO (Divisional Crime Officer) of the station said it was not possible because my son too was at fault. At the end of the day, the bank promised to pay N350,000.”

Adebari said the bank showed no commitment to pay the money which made him to take the matter to the Special Anti-Robbery Squad in Ikeja, adding that the police invited the bank manager and the CCTV recording was properly replayed.

“It indicated that the two fraudsters had been in the bank for about 20 minutes before my son entered. One of them dressed corporately while the other one was in a native dress. They were frolicking around and at some points, sat on a chair without being challenged by security men.

“The representative of the security company who was also invited by the police said the guards had been warned to challenge anybody that is in the bank for five minutes without doing anything,” he stated.

Adebari explained that SARS eventually asked the bank to refund half of the money, adding that the bank manager had been evasive.

Narrating his experience at the bank that day to our correspondent, Sefiu said, “While I was filling the teller, an elderly man stood beside me, filling his teller as well. A man who dressed like a bank official approached the elderly man and offered to assist him deposit the money.

“Few seconds later, he came back with the money and told him that the teller was not properly filled. The elderly man asked me to assist him check the information on the teller. While I was doing that, the man collected my teller and the money to help me deposit it. I was expecting him to come back not knowing that he had gone out. It was when I saw the CCTV recording that I knew he went out with the money. I didn’t know when the elderly man also left the bank.”

However, an official of the bank, who spoke to our correspondent on condition of anonymity, said the bank was not complicit in the incident.

The official explained that the CCTV recording revealed that the suspect was not a worker of the bank.

He said, “The incident has nothing to do with the bank. The CCTV was reviewed in the presence of the man (Adebari) and it showed the person who collected the money from his son. It was very clear that the person is not an official of the bank. He then reported the case at the police station. It was resolved that his son and the security men, not the bank, were at fault. The security company was asked to pay him part of the money.

“After the resolution, the man was not satisfied and he reported the case at SARS office. The bank is not responsible for what happened. The man saw that his son gave the money to somebody who is not an employee of the bank.”

An enquiry on the case sent to the email of Hogan Guards Limited, the private security outfit working with the bank, since Thursday, November 14, had yet to be replied to as of press time.

Efforts to get the comment of the spokesperson for the Lagos State Police Command, DSP Bala Elkana, on the matter proved abortive as he did not pick up calls to his mobile. He had also yet to reply to a message sent to him as of press time.