43-Year-Old Man, Two Others Arrested For Faking Kidnap In Imo


The suspect had lied to his victim, said to be living in US, that he had been kidnapped, in order to extort money from him. 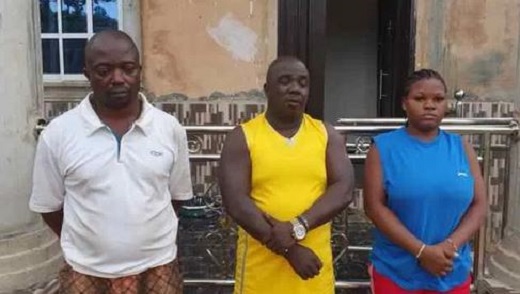 One Emmanuel Obioma, a 43-year-old man from Awonmama in Oru West local government area and two others have been paraded by the Imo state police command for faking a kidnapping deal to collect to the tune of N1 million from one Ugo Emeka, said to be living in US.

In a statement to newsmen yesterday in Owerri, by the state Police Public Relation Officer, PPRO, Orlando Ikeokwu, also listed as exhibits recovered from the suspects to be eight SIM cards; laptop; black lexius 330 and mobile phone.

According to the police, before their arrest Obioma, had lied he had an accident in which he demanded from his victim, said to be living in US, Ugo Emeka, who sent him (Obioma) N821,000 to treat himself.

Narrating the story, he said: “On the 2/11/19, operatives of the special anti-robbery squad SARS, Acting on credible intelligence arrested the above mentioned suspects for the above offence.

“Emmanuel Obioma, initiated a relationship with one Ugo Emeka ‘f’ , who lives in the United States of America,he claimed he lives in US as well, he installed software which ensured that a foreign number appears on the lady’s phone each time he called.

“Having succeeded in making her believe he lives in the US, he then informed her that he was travelling to Nigeria, upon his fake arrival to Nigeria.

“He claimed he had an accident of which two people lost their lives in the process,as such he demanded financial assistance, for his treatment as a result of which she sent him the sum of eight hundred and twenty one thousand Naira (N821,000),on two instalments.

“Furthermore, on the 17/10/19, he raised false alarm of being kidnapped while returning to Owerri from Kogi State, as a result of which he demanded one million Naira (N1,000000), which he said was the amount due for ransom. hence the arrest.”