The story has been told of a pregnant woman who allegedly saw the ghost of her late father in her ultrasound scan. 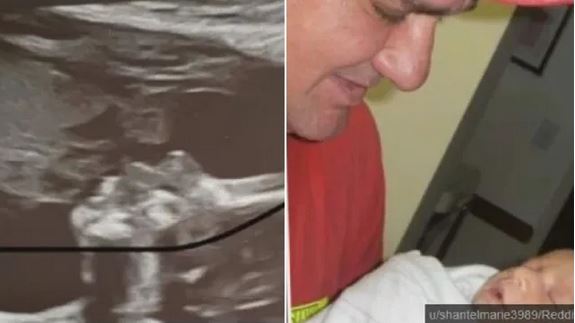 to a photo of her late dad Chuck cradling her older daughter when she was an infant (Pictures: CBS News 8)


A pregnant mother is convinced that the ghost of her late father made an appearance in an ultrasound scan.

Shantel Carrillo from San Diego says the scan of her unborn daughter mirrors a photo of her dad Charles cradling her older daughter.

She even produced the photo, with the two images bearing an eerie resemblance. Carillo, who lost her dad in 2016, didn’t notice the likeness until she shared the snap on Facebook, and people began commenting.

She told CBS News 8: ‘People were messaging me, saying it looks like someone’s kissing your baby.

‘I started looking at it, and i found a picture of my dad holding my first daughter and its like the exact same thing.

Skeptics have said that the photo is likely to be a coincidental trick of light – but Carillo is thrilled by the snap and apparent closeness of her dad to a granddaughter he will never get to meet.