Sowore's wife, children and others have been caught on camera pretesting the man's detention in Nigeria. 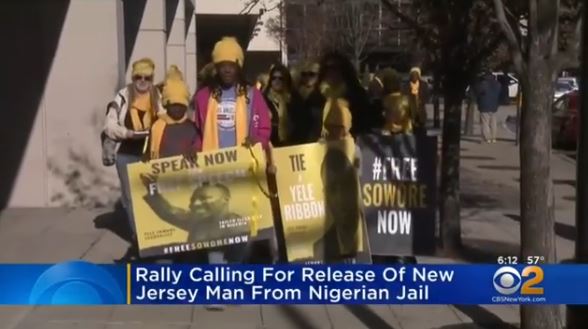 Following the failure of the Department of State Services (DSS) to release the convener of the RevolutionNow movement, Omoyele Sowore despite court orders, his wife, children, and supporters took to the streets of New Jersey to protest for his release.

After spending 116 days in detention, friends and family staged a rally, on Tuesday, outside the office of U.S senator Bob Menedez. The protesters tied yellow ribbon on a tree, clamouring for Sowore’s freedom.

His wife, Opeyemi Sowore said: “I can’t explain to our children why their father isn’t here for thanksgiving. The children need their father, I need my husband. Communications have been extremely sparse”.