The access tags of the 35 aides of Vice President Yemi Osinbajo who were affected by the controversial dismissal, have been withdrawn by SSS. 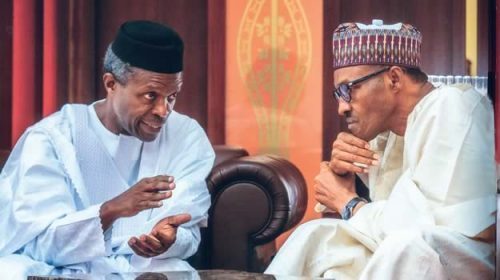 The State Security Service (SSS) has withdrawn access tags from about 35 aides of Vice President Yemi Osinbajo who were affected by the controversial dismissal earlier this month, PREMIUM TIMES has learnt.

The SSS started withdrawing passes from the aides on November 21, and even went further to blacklist some of them from future access into the Presidential Villa, according to multiple sources speaking with PREMIUM TIMES on the development.

When President Muhammadu Buhari returned from his private stay in London earlier this month, one of his first actions was to speak about the sack of the aides working with Mr Osinbajo.

Mr Buhari said it was part of re-organisation “aimed at enhancing service delivery to Nigerians”.

The president, while taking questions from reporters as he touched down in Abuja on November 16, also decried “ethnic and political dimension” given to the exercise.

“The exercise, which has been ordered by the president, is to streamline decision-making, cut down multiple authorities and reduce the cost of administration,” Mr Shehu said. “It is also an appropriate response to the general perception that the presidency has an oversized and bloated workforce which acts as a drag on efficiency.”

While Mr Shehu claimed the action was aimed at cutting cost for the government, most of the affected aides were engaged and paid by development partners. They were only sent to the vice-president’s office as part of several social programmes supported through public-private partnerships.

Despite presidential confirmation that employment of some vice-president’s aides had been terminated, none of the affected officials received a formal communication to that effect.

About 35 officials distributed across several departments attached to the vice president’s office were reportedly affected by the dismissal. Their sack letters had been given to Mr Osinbajo, who withheld them and asked the aides to continue working in their respective roles until the president returns from London, PREMIUM TIMES learnt from those familiar with the matter at the time.

Mr Osinbajo had protested the dismissal of his aides without prior consultation with him by the president’s chief of staff, Abba Kyari. The vice president planned to convince the president to keep the aides in place because their roles were crucial and funded by donor private organisations and not public treasury, sources told PREMIUM TIMES.

But two weeks after the president returned, a spectre of uncertainty still loomed over the aides’ employment status, with the situation deteriorating by the day, officials told PREMIUM TIMES.

“They started withdrawing their tags last week Thursday (November 21) and by this Wednesday (November 27) they have withdrawn everyone’s tag,” a senior presidency source told PREMIUM TIMES under strict anonymity to avoid being rebuked for speaking to journalists without permission. “Effectively, they have taken away their official roles, they can no longer act in an official capacity.”

The official said some of the aides were blacklisted by the SSS even after their tags were withdrawn.

“What this means is that they can not even come to the Presidential Villa again even as visitors,” the official said.

PREMIUM TIMES has not been able to independently verify this.

The source insisted Mr Buhari did not authorise the dismissal of the aides, but the expectation that Mr Osinbajo would be able to convince his boss to rescind the decision upon his return from London has been largely futile.

“The president did not authorise dismissal of the aides,” the source said. “He only authorised their redeployment to order agencies outside of the vice-president’s office.”

But Mr Kyari decided to issue letters dismissing the aides, and by the time the president returned, it was virtually too late to reverse the decision, PREMIUM TIMES learnt.

“The vice president has decided not to relate with Abba Kyari over the matter, but even his direct discussions with the president about the issue have been too slow and too difficult than we expected,” another official said.

Presidential spokesperson Garba Shehu did not return requests for comments Friday afternoon. Peter Afunanya, chief spokesperson from the SSS, also declined comments about the secret police’s role in the controversy.

Although the names of affected aides have not been officially disclosed, PREMIUM TIMES has identified some of them. and reached out for comments, but they declined.

A senior administration official told PREMIUM TIMES the aides were still working with the vice-president and remained on the payroll of their respective donor agencies.

“Even though they have been officially sacked by the presidency, they still continue to work for the vice-president and the donor agencies are paying them in that capacity,” the official said. “But many of them are becoming increasingly demoralised by the political games that now overshadow their career.”

Corruption: Embattled AGF, Malami Writes Buhari, Explains How He Made His Money