Mr. Osahon alleged that the suspected thugs who besieged his residence in their hundreds were led by one Mathew Ekhibiorobo. 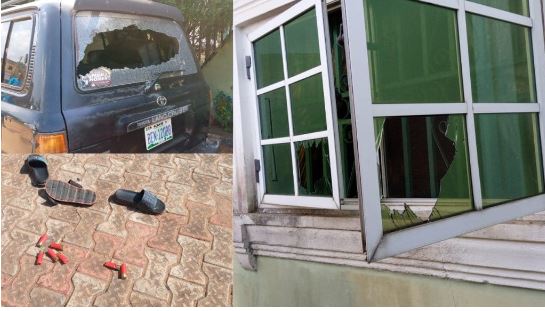 The residence of a chieftain of the All Progressives Congress and a former member representing Ovia federal constituency, Hon Engr. Isaac Osahon was attacked Friday afternoon while holding a meeting with some of his loyalists.

The ugly incident saw the destruction of property worth millions of naira in the residence of the Honourable who represented Ovia from 2011 to 2015 at the federal house of representatives.

Mr. Osahon alleged that the suspected thugs who besieged his residence in their hundreds were led by one Mathew Ekhibiorobo, disrupted the peaceful meeting and engaged in gun dwell with the policeman guarding the residence.

He alleged that the party chairman in Ovia North East, Mr. Etiosa Ighodaro had earlier called him and allegedly threatened to unleash thugs on him if he conveyed any meeting anywhere in the state.

“I saw Mathew Ekhibiorobo with my eyes, he led the thugs to my personal residence with a Sienna car. Look at the flour littered with bullets”

“They invaded my house, destroyed some vehicles and carted away valuables such as money, phones and the likes. They assaulted my aged mother inlaw. The attackers are loyal to the state government, we don’t belong to the same side.”

Some persons that attended the meeting like Rt. Hon Bright Osayande recounted the ordeals, describing it as barbaric and a pitiable situation where residents could no longer hold a meeting without undue invasion.

He alleged that the attacked could not be far from the current crisis rocking APC in the state but affirmed that the party remains one.

He appealed to the police to swing into action and fish out the culprits of this dastardly acts in order to bring them to justice.

Meanwhile, the LGA party chairman, Amb. Etiosa Ighodaro when contacted told DAILY POST that he was not aware of the attack.

Amb Ighodaro who denied the attack said irrespective of the situation of the party, he cannot stoop so low up to the extent of attacking his fellow party men.