Accreditation and voting are going on smoothly with the presence of security personnel and party agents. 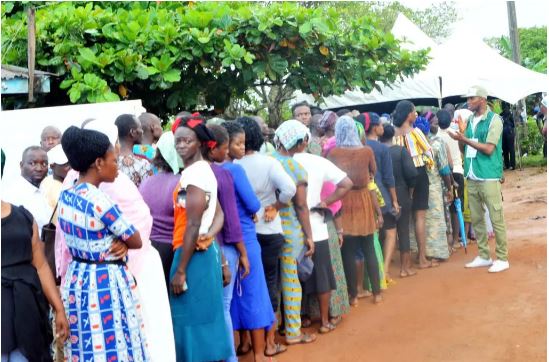 The Kogi West Senatorial rerun Election holding across 53 polling units has been marred with voters’ apathy.

DAILY POST correspondent who visited some affected polling units in Lokoja where elections were cancelled reports that elections material arrived as early as 8am.

Accreditation and voting are going on smoothly with the presence of security personnel and party agents.

Some electorates who spoke to a reporter on Saturday said some people decided to shun the process over fair of possible attack by suspected thugs as witnessed on November 16th.

A voter who never wanted his name in print said, ” You already know some of the reasons why voters decided to stay back at home. I’m here to fully all righteousness. Last Saturday in Kogi was a theatre of war. We saw men in police uniform invading polling units to cause mayhem on the people and snatch ballot boxes.

It could be recalled that the rerun which first took place on November 16 was declared inconclusive by the returning officer of the Independent National Electoral Commission (INEC), Professor Olayinde Lawal.

According to him, the total margin between the All Progressives Congress, Mr. Smart Adeyemi and that of the Peoples Democratic Party, Senator Dino Melaye was lower than the number of cancelled votes in 53 polling units of the 20 registration.

Senator Adeyemi is currently leading with a total of 80,118 votes, while Senator Melaye has 59,548 votes from the seven Local Government Areas during the November 16 rerun.