DSS Rescues Two Kids, 3 Years After They Were Kidnapped (Photo)


Two children have been rescued some three years after they were reportedly kidnapped in Kebbi. 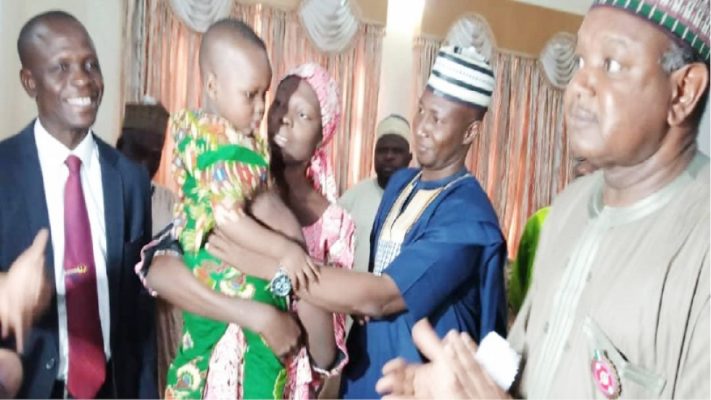 According to Daily Trust, the personnel of the Department of State Service (DSS) yesterday rescued two children aged three and four from their abductors in Kebbi State.

The children, according to DSS, were stolen by their abductors on the 16th of February 2016, but were rescued and reunited with their parents yesterday.

A woman whose name was given as Agata and two other accomplices, Moses and Samson, have been arrested in connection with the abduction.

The three suspected child traffickers were arrested in Enugu, Anambra and Lagos respectively.

While reuniting the children with their parents at the Government House in Birnin Kebbi, Governor Abubakar Atiku Bagudu, said two of the suspects were arrested in connection with abduction and sale of the two children that were earlier rescued by the DSS on the 10th of November this year in Zuru area of the state.

He said additional two children were rescued by the DSS in Zuru area of the state.

“The four-year-old boy, Silan-Laini James, was stolen while playing in front of his grandfather’s home at Sha Da wanka in Tudun Wada, Zuru Local Government Area of Kebbi State,” he said.

Bagudu said the children were rescued after months of painstaking investigation by the DSS on series of abductions that had taken place, particularly in Zuru area of the state.

The mother of one of the rescued children, Mercy Daniel, urged mothers to be more vigilant.

“What happened to me can happen to any other mother. I urge parents particularly mothers to be more vigilant with their children”, she said.