IPOB claims the federal government only declared Ifeanyi wanted because it plans to shut him down from defending the group in court next year. 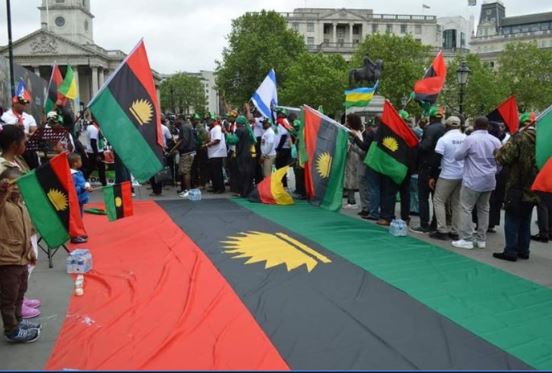 The Indigenous People of Biafra, IPOB, on Wednesday, condemned the Police for declaring its leader, counsel, Ifeanyi Ejiofor wanted.

Recall that a combined team of police and military officers had invaded the residence of Ejiofor’s in Oraifite, Anambra State in the early hours of Monday and allegedly killed two people while several others were injured.

Confirming the invasion, the Anambra State Police Commissioner, John Abang had declared Ejiofor wanted over alleged killing of two officers by members of the IPOB in Oraifite, Ekwusigo Local Government Area of the state.

However, IPOB says the federal government only declared Ifeanyi wanted because it plans to shut him down from defending the group in court next year.

A statement signed by IPOB’s spokesperson, Emma Powerful reads: “The purported and useless declaration made by the Commissioner of Police in Awka against IPOB lawyer Barrister Ifeanyi Ejiofor is baseless. We all are aware of how this same Nigeria Police and their partners in crime, the military used the same useless words when they invaded the home of our leader on September 14, 2017. They can go on deceiving gullible Nigerians about their motive for the barbaric invasion of Barrister Ejiofor’s home but the facts are all there for the world to see.

“When they invaded Afaraukwu it was in pursuit of a truck laden with explosives, today the story has changed to the enforcement of a mere petition. It’s the height of incredulity to think that any sensible person will buy such a story. The attitude of some sections of the media leaves a lot to be desired on how biased their coverage has been. There has been no condemnation of the extra-judicial murder of two innocent people in Ejiofor’s compound. Sections of the media in Nigeria is the reason why this government of impunity quite literally gets away with murdering innocent people.

“The only reason why the police declared our lawyer wanted is to stop him from handling IPOB cases and to make sure he does not attend court in January 2020. Part of the wider motive, however, is to intimidate lawyers into not accepting IPOB cases. In their warped thinking, Aso Rock thinks this will pave the way for spineless judges to do their bidding. They want to use the courts to stop the raging Biafra agitation.”

Nigeria Police always intimidate and kill people at will and they always try to justify their crime by declaring people wanted.

Nigeria Police must come out to tell the whole world why they took this decision to kill Barrister Ejiofor and his family. Police shooting sporadically in the compound of a man they claim they invited for questioning leaves their motive in no doubt in the minds of the public. They came to kill him.