A notorious armed robber terrorizing residents of Umuahia in Abia state has finally been killed. 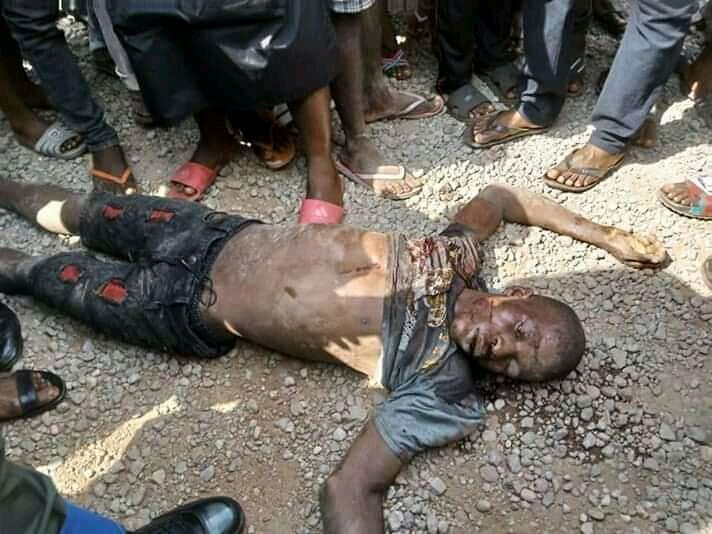 Notorious armed robber, Grave
Many people in Umuahia Abia state have come out in their numbers to catch a glimpse of a notorious armed robber, Sampson Iheukwumere Nwokocha aka Grave, who has been terrorizing the city of Umuahia after he was killed by the police.
The notorious and wanted armed robber, Grave engaged in an encounter with a tactical team of the Nigeria Police command in Umuahia.
He was caught up by the superior fire power of the team. Many people from different parts of the city of Umuahia gathered to confirm his death. Some individuals expressed their joy that at last, they will experience some peace and quietness in the city.
ABN TV correspondents who were at the scene, gathered that there was a huge traffic at Bende road where the Nigerian police command headquarters is located due to the influx of people trooping in and out of the police command headquarters to get a glimpse of the remains of the notorious armed robber.
One of the people at the scene, narrated his encounter with the deceased armed robber to ABN TV correspondents.
“One Sunday early morning, he came to our place and open our gate and entered the cold room. He shot gun in the air and said everybody should lie down, then all of us including people that came to carry their meat and buy fish from us. He took my phone and my money and also robbed everybody that was there. He came with his gang and they were about three in number. Am very happy now, at least, everywhere will be calm now,” he said.
Meanwhile, the Abia state commissioner of police, E. Ene Okon, in a press release said, the Notorious armed robber Sampson Iheukwumere Nwokocha, aka Grave, of Ossah Mgbaja in Umuahia north L.G.A, who was recently released from prison led armed robbery gang that invaded Helson Hotel Umuahia, to rob staff and guest of the Hotel on 01/11/2019 at about 0250 hours during which one of the policemen on duty was shot dead and his rifle carted away.
The notorious armed robber will be committed to mother earth soon.
Top Stories