Aisha Alkali Wakil aka Mama Boko Haram has been arraigned in court for alleged N66m scam. 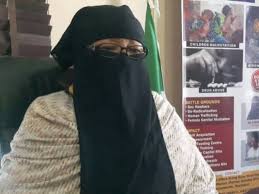 Barr. Aisha Alkali Wakil
The Economic and Financial Crimes Commission (EFCC) on Wednesday dragged Barr. Aisha Alkali Wakil popularly called Mama Boko Haram to court over allegations of fraud amounting to N66 million, TheNation has revealed.
Mama Boko Haram along with Tahiru Alhaji Saidu Daura, the Programme Manager of Complete Care and Aid Foundation, an NGO owned by Barr. Aisha Wakil was also joined in the suite.
The case which was read before Justice Aisha Kumaliya of the Borno State High Court, Maiduguri on a-3 count charge borders on “cheating and conspiracy to the tune of N 66m”.
Ali Tijjani, the petitioner alleged that, on 7th September, 2018, his company was awarded a contract to supply processed maize grain otherwise called BISKI worth N51m.
He further alleged that, his company collected the said grain from Maiduguri Flour Mills and supplied it to the NGO and was received by one Tahiru Alhaji Saidu Daura on behalf of Complete Care and Aid Foundation.
Tijani also alleged that the duo requested AMTMAT Global Ventures to process and fund the CEO and Programme Manager’s trip to Morocco to the tune of N51m.
Count two reads: “That you TAHIRU SAIDU DAURA, while being a Programme Manager of COMPLETE CARE AND AID FOUNDATION, AISHA ALKALI being the CEO of COMPLETE CARE AND AID FOUNDATION. On the 7h September, 2018 at Maiduguri within the Jurisdiction of this Honourable Court dishonestly induced ALI TIJJANI the CEO and Alter Ego of AMTMAT Global Ventures to deliver to you processed Maize grains (BISKI) valued at N51, 000,000.00 (Fifty Five Million Naira) which you are yet to pay and thereby committed an offence contrary to Section 320(a) and punishable under Section 322 of the Penal Code Cap 102 Laws of Borno State.”
The defendants pleaded not guilty to all the counts.
The prosecution counsel, Fatsuma Muhammad applied for a trial date and requested for the remand of the defendant in the Correctional Centre.
In her ruling, Justice Kumaliya ordered awarded N30 bail against the defendant and two sureties in the like sum.
Those sureties according to the judge must be at the level of a permanent secretary in the Civil Service and must equally have landed property in GRA, Maiduguri with the property’s tittles deposited with the court registrar.
The matter was adjourned to January 13, 2020 for trial.
Top Stories